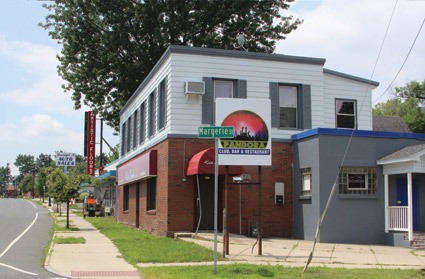 Club Pandora – formerly the Kick-Back Lounge – will be closed until the owners find a manager of record who can meet the approval of the Pine Pont Neighborhood Council, the Board of License Commissioners and the Alcoholic Beverage Control Commission. Reminder Publications photo by G. Michael Dobbs

SPRINGFIELD – For the neighbors living near Club Pandora – the former Kick-Back Lounge – on State Street, the patrons of the bar and restaurant have created years worth of problems – from illegal drinking in the club’s parking lot after hours to noise to gunshots.

All of that will be put on hold indefinitely as the manager on record for the bar, Keisha Edmondson and her attorney David Berson, were told by the Board of License Commissioners the club would be closed until it hires a manager who passes the approval of the Pine Point Neighborhood Council, the Board and the Alcoholic Beverage Control Commission in Boston.

The ruling came at the end of a lengthy meeting on July 13 that had been preceded by a three and an half hour hearing on whether or not the club should be allowed to keep its entertainment license. Mayor Domenic Sarno explained to Reminder Publications that once he receives the recommendations of the hearing officer he will make a decision about the entertainment license.

Sarno attended the complete entertainment license hearing after receiving an invitation from residents.

“This is about respect,” Sarno said of the situation. “This is about quality of life.” He added he was very touched by the testimony of the neighbors, especially one who had lived near the club for the past 63 years.

The hearing and then the meeting with the Board stemmed from two events – one on June 3, and another on June 4 during which shots were fired and two people were killed and another one injured.

On June 3, Springfield police officers were called in to help the club’s security clear the parking lot at 2:20 a.m. During that incident, the police were not able to locate Edmondson as the manager of record because an outdated license with the previous manager’s name and phone number was given to the police by club staff.

Edmondson said she was there at the club in her office but was unaware the police had been called and officers were looking for her.

Commissioners expressed their doubts and concerns about her statement.

Berson disputed some of the charges leveled at club management, including allowing patrons existing the establishment with alcoholic drinks.  He said his client wanted to present a more detailed security plan that would address such issues.

Commissioners Robert Casey and Ronald Senez rigorously questioned Edmonson. Senez said, “You’ve got a parking lot with a problem, but you’re inside.” Edmondson admitted, “It’s hard to get everyone squared away.”

Berson suggested the parking lot was not adequate and said his client was considering to setting up an arrangement with the Family Dollar store across State Street for late night parking, a suggestion the commissioners quickly questioned.

At one point, Senez responded to a statement made by Edmondson with “my middle name is Tucker, not sucker.”

Throughout the meeting Edmondson admitted she knew there was illegal drinking in the parking lot and in cars, but said she didn’t know what to do about it.

“This is Duck’s Place times four,” Sygnator said, referring to a problem-plagued bar that was also on State Street.

After the meeting, residents, who asked to remain anonymous, said the noise level from the club as well as problems such as club patrons sitting on the porches of the homes chatting at 3 a.m. were just some of the problems they had to endure.

One resident had planned to buy a nearby building for his business, but decided against because of the issues the club caused. Another resident said her home had been shot.

While the residents agreed with the decision of the board, they expressed concerns that it was only a temporary solution.