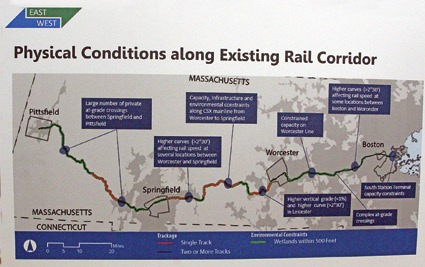 The establishment of passenger rail service to Boston is not without considerable challenges as this map shows.

SPRINGFIELD – The depth of interest about East-West passenger rail service was easily seen at the first public hearing on the subject conducted by MassDOT on March 12.

The conference room at the UMass Center at Tower Square was filled to standing room only, and people came from across the state to support the concept. A contingent from Chester was there to ask for a train stop in order to better support economic development in 11 hill towns. Residents of Palmer asked for the same thing as they see a train that would only stop at major communities a detriment to them.

A resident of Boston came to Springfield to attend the meeting and to say the train service would be a boon to Boston sports fans from across the Commonwealth.

Benjamin Turon of the Empire State Passenger Association traveled from Saratoga Springs, NY, to listen to the presentation. He told Reminder Publishing his organization would like to see the proposed service stretch to Albany, NY.

The many moving parts to the issue of establishing east-west high speed passenger rail service linking Pittsfield to Springfield to Boston was also clearly evident by the information presented.

Project Manager Jen Slesinger told the audience there are multiple considerations the study must consider, both of market demand and physical constraints.

For the MassDOT study, the goal is to determine how many people would use the train service and if the existing track conditions and use would allow for the creation of high speed rail. Slesinger said there is a consideration what would happen if the proposed train service were not “high speed.”

The advantages to establishing the train service includes opening up Western Massachusetts to people in the eastern part of the state who would like to become home buyers; decrease automotive congestion and reduce greenhouse gases, Slesinger said.

She noted the current tracks are used every day by 14 freight trains, 58 Massachusetts Bay Transit Authority commuter trains (between Worcester and Boston) and two Amtrak trains.

Slesinger said from Worcester to Boston, the MBTA control the tracks, but from Pittsfield to Worcester fright train giant CSX controls the tracks. Putting additional passenger rail would be “challenging,” she said.

MassDOT has analyzed at the competing modes of transportation and use of cars has increased 2 percent annually on Interstate 90 from 2008 through 2017.  At the same times the commuter service to Worcester has seen an increase in ridership by 45 percent. Buses provide timely service linking the cities, especially during off-peak times.

Another consideration is whether or not Boston’s South Station could physically handle more trains, especially during peak times.

She said the current tracks are “very curvy” as a map illustrated, which means the maximum speed would be no more than 80-miles per hour.  There is an alternative to using the existing tracks, Slesinger noted. There is a possibility of building a new set of tracks in the Interstate 90 corridor controlled by the Commonwealth. While that route would eliminate many of the curves of the existing tracks, the turnpike route presents another challenge of more grades.

While sharing the existing track with CSX would be the easiest route for the Commonwealth to establish, Slesinger said that solution would also result in the longest travel time. The Commonwealth would have to buy rights of way on the CSX tracks for the new service, she explained.

Former Senate President Stan Rosenberg was among those testifying in support of the project, he said that Western Massachusetts is “really engaged” in it and suggested the Commonwealth begin work studying a “northern tier” passenger rail service that would link cities along the border with Vermont and New Hampshire to Boston.

He added the housing market in the greater Boston area has been priced out of reach for many people and this train service would allow for people to live in other parts of the state while maintaining their jobs.

Kerry Jackson of West Springfield said she moved here 15 years ago from Boston because of the lack of affordable housing stock for the middle class. She asserted the people of Boston area would want this service just as much as the residents of Western Massachusetts.