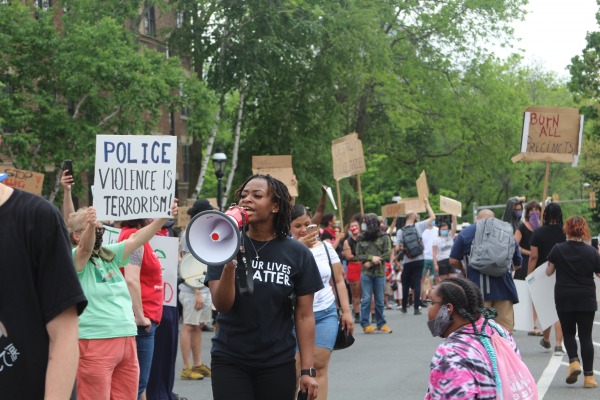 SPRINGFIELD – “No justice,” a protest organizer called out through a bullhorn.

“No peace!” came the response from the crowd of hundreds of sign-wielding demonstrators.

The people that lined the side of Pearl Street opposite the Springfield Police Department headquarters from 1:30 p.m. to 3 p.m. on May 29 were there to decry the death of George Floyd. The black Minneapolis man recently died while in police custody after an officer knelt on his neck for nearly nine minutes. Bystander video went viral online and the event has sparked protests and rioting in cities across America.

Protesters chanted “black lives matter,” and “murder is murder,” as well as some of Floyd’s last words, “I can’t breathe.”

They also called for Minneapolis police officer Derek Chauvin’s arrest. Later that day, Chauvin was taken into custody on charges of third-degree murder and second-degree manslaughter.

But most of the cries yelled across the two-lane road were more aimed at the institution of the police in general and were summed up by many as, “stop killing black people.”

Thomas yelled across the street to the couple dozens of police officers lined up in front of the station behind barricades, “Those officers [in Minneapolis] did you a great disservice. People of color are human beings.”

Originally, demonstrators stayed in the grass on the side of the road opposite the station, but at one point two organizers crossed to the median and were met by a police officer. More protesters joined them and officers began directing them back to the other side of the road.

After a few tense moments of arguing in which organizers stood between the police and the protesters with their arms stretched out to diffuse the situation, both sides retreated to there respective corners.

Organizer Maylaya Miller called out to her fellow protesters, “Keep it peaceful. I know we’re angry, I know we’re tired.”

Miller gestured to the police across the street, who wore ballistic vests and had a man positioned on the roof of the station. “They’re strapped head to toe, but these men are terrified of an unarmed black man? How do I rely on them if I can’t trust them,” Miller asked.

At the beginning of the protests, many drivers who passed honked their horns in support. Some drivers were themselves protesting, circling the block with signs attached to their vehicles. By 2 p.m police had blocked off the lane of traffic closest to the station to prevent the constant cycle of traffic.

After that, the vast majority of demonstrators crossed to the median and took up a position in the closed lane of traffic.

Protester Joseph Twarog said, “Enough is enough. We’ve seen this repeatedly.” He said the police had become brazen in their violence because there were no repercussions.

“As a white man,” Twarog said, “I have plenty of privilege. If I crossed over there,” he pointed to the police across the street, “and got arrested, I’d stay alive. A black man would probably be thrown to the ground and beat up.”

“It’s too much - these racist cops, and racist members of society are emboldening the cops,” she said. Marvel and several others became more incensed after noticing officers laughing amongst themselves while protesters angrily shouted.

“People have a right to be angry,” said Holly Richardson, a protest organizer from Out Now, a queer rights organization in Springfield. “People are enraged.”

“There’s never been anything like this in Springfield,” Moriah Lee Wilkins, a community activist and business owner said of the protest, which Richardson estimated 1,000 people had attended.

She hopes that long-term social justice programs will come from the protest and lead to “laws, hearts and economic change.”

Throughout the hour and a half protest, organizers continued to remind protesters not to engage in any violent actions. At one point, the crowd encouraged the police officers to cross the barriers and stand with them.

The protest ended on time and the crowd dispersing at 3 p.m., with the exception of a few protesters on the median with their signs. One protester shook hands with a police officer for being “a good sport. I’m yelling in his face and he was a good sport about it,” she said.

Springfield Police Commissioner Cheryl Clapprood said in a statement, “The protest went as well as it could have. The protesters got their point across, there were no arrests and no damage [and] our police officers acted professionally, as well.”

She continued, “What I’d like people to understand is that police officers are frustrated, too, when incidents like this halfway across the country happen. It takes away from the strides we have made in the community, but I want to assure our community that those type of tactics you saw in Minneapolis, it’s just not how we train our officers here. We emphasize keeping body-weight off areas of the body such as the head, neck, throat and spine and we stress de-escalation - minimizing the need to use force, focusing on communication skills.”