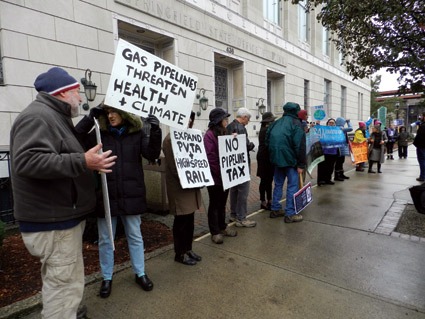 SPRINGFIELD – About 30 protestors gathered at the State Office Building on Dwight Street on Nov 16 to deliver a message to Gov. Charlie Baker: issue an executive order to support green fuel technologies.

Three representatives carrying the letter were allowed to come into the building and were escorted by two Springfield police officers, with another three staying with the rest of the protesters.

The letter was from the Springfield Climate Justice Coalition, Arise for Social Justice and Climate Action NOW.  This is the second time the three groups have sent such a letter to Baker.

They were allowed to carry the letter to Michael Knapik’s office, who is the governor’s representative in Western Massachusetts. Knapik told Reminder Publications he was not in the office on Thursday but was aware the letter was going to be delivered. He said he was not sure why there was a police escort for the delivery.

The letter delivery and protest was coordinated with a similar one in Boston, City Councilor-elect Jesse Lederman said. Lederman is a member of the Springfield Climate Justice Coalition.

Delta Carney of the Sugar Shack Alliance, which has been opposing new natural gas pipelines, said, “We want him [Baker] to take his hand out of the money hole and listen to the people who put him in office.”

The letter reads: “We request that your office issue an executive order direct all state agencies to do everything in their legal authority to stop the construction of new fossil fuel infrastructure and instead maximize and facilitate energy efficiency, conservation, demand response and renewable energy to meet the energy needs of Massachusetts.

“The draft executive order accompanying this letter calls upon your administration to lead by: limiting permitting for unhealthy and climate change-inducing fossil fuel infrastructure; opposing pipeline taxes; fully implementing the Climate Justice executive order providing relief form pollution to poor frontline communities and directing jobs and economic development to these communities that have suffered the most from the excesses of the fossil fuel economy.”

The letter reads on asking Baker to support the full funding of the Pioneer Valley Transit Authority and the establishment of “reliable east-west rapid transit to connect us to Boston, a Springfield to Boston high-speed rail.”

To protect forests, which can reduce greenhouse gases, the groups signing the letter asked for the state not to advocate biomass electrical generating operations as that could lead to deforestation.

The groups also asked Baker to direct state resources to assisting evacuees from Puerto Rico who are now living with families and friends in Western Massachusetts.

One of the protesters, Dr. Marty Nathan, vowed to Baker, “We’re going to keep on asking you until it happens.”