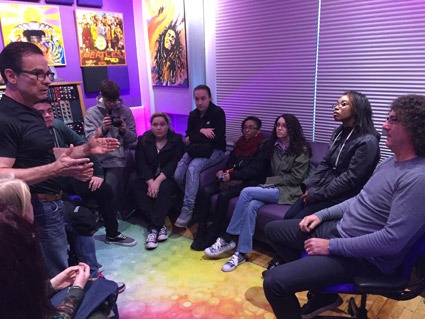 SPRINGFIELD – A group of Roger L. Putnam Vocational Technical Academy students heard about the challenges of a career in entertainment from two professionals in New York City.

David Horgan, who teaches a program on filmmaking for the after-school BSEP program, arranged a field trip for students to new York City to meet and speak with actor Peter Scolari and with scoring and sound designer Doug Maxwell.

According to its website, the 21st Century BSEP program provides “interdisciplinary, hands on student-centered programming that contributes to the academic achievement and overall development of Putnam High School students. We aim to address the multiple needs of the youth and their families in our program through increased supervision and access.”

Horgan, who has taught this program for six years, meets with students weekly. He guides the students through writing, and producing a short film. The class brings a new discipline to students who never thought they could produce a short film, he explained to Reminder Publications and the screening to the production to their families and friends is very gratifying.

“It really boosts their self-confidence,” he said.

Horgan, who has built up a professional relationship as well as a friendship with actor Scolari – who is currently appearing on the TV show “Gotham,” as well as preparing for a role in the revival of “Wicked” on Broadway – arranged for a meeting between the students and the veteran performer as a culmination of the trip. The group also toured the NBC television center at Rockefeller Plaza.

“It was such a robust trip,” he added.

Scolari met with the students in Maxwell’s recoding studios and gave them advice about their lives and careers. Maxwell actually scored and designed sounds for the students who brought a clip from their production.

Horgan has had a career in music and film production and uses his experiences to education programs. He added that luckily for him people with whom he has worked also lend him their support of his students.