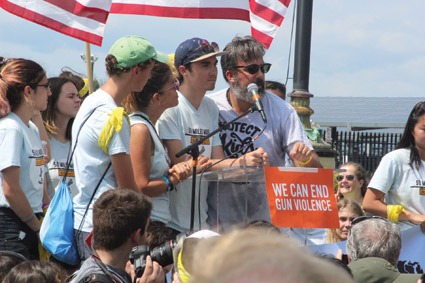 SPRINGFIELD  – David Hogg, one of the Parkland Florida high school students who has risen to prominence in the movement against gun violence, said at a rally conducted on Aug. 25 he had not planned to speak.

About 100 marchers who had participated in the 50 Miles More protest culminating in a rally before the gates of Smith & Wesson listened to Hogg urge people to vote for change in the election on Nov. 6.

“You have to make America the country you want it to be,” he said. He added that people “had no right” to discuss issues such as gun violence unless they vote.

“The system has failed. It’s our job to fix it by voting,” he said, and then pointed to a table under a canopy where people could register to vote.

Manuel Oliver, the father of slain student Joaquin Oliver, addressed the issue of gun safety more directly. He wondered if there were mothers working at Smith & Wesson and whether or not any of them worked on the weapon that was used to kill his son.

When a pro-gun member of the audience said something, Oliver said, “Thank God for us that we’re here to save our kids and your kids.”

He believed the two sides should work together to “create a safer America.”

For Manuel Oliver this was his second trip to Springfield. Earlier this year he created a mural in front of South Congregational Church honoring the victims of the attack on the high school.

The anti-gun marchers walked past a contingent of pro-gun protesters that were kept on opposite sides of the street by Springfield police officers and state troopers.

Some of them carried the Gadsden flag – the Revolutionary War flag with the coiled rattlesnake and the phrase “Don’t Tread on Me,” adopted by members of the Tea Party movement – while others carried signs stating they love Smith & Wesson.

There was a political commentary as well to the counter-protest with signs for various Republican candidates for state office and a sign supporting President Trump.

Although the counter protesters wanted to be able to join the opposing side at their rally, Springfield police denied the request.

Kency Gilet of Springfield, who ran for City Council during the last election, described the group assembled as “patriots and people supporting the Second Amendment.” He added there were no Nazis or white supremacists among the ranks.

Gilet called Smith & Wesson “a greater employer” and wondered if any local elected officials would support restrictions on products made by the company. It was a question he intends to ask during the next election.

Springfield resident Bob Powell called the marchers “misguided.” He noted the shooter in the Parkland case was known to both school officials and local police as someone with numerous emotional issues. Both the police and the school officials failed to take action, Powell asserted.

“Why did this kid fall between the cracks?” Powell asked.     He also charged that gun violence critics blame people such as himself and other National Rifle Association members rather than people directly involved.

He said that marches, such as this one, were “a wasted effort with an outcome of zero.”

where are the other comments??

wrote on 8/31/2018 at 1:52:21 PM
There is no such thing as "gun violence". This is a focus-group-driven buzzword and talking point to create an imaginary bogeyman as the main anti 2nd Amendment propaganda tool. There are PEOPLE who commit violence with guns, but there are many more people who commit violence without them.
And, since the term "gun violence" is a catchword/cliche, the title suggests an unattainable goal. People have been robbing and killing other people, using the weapons of the day, since the beginning of man on this planet, which identifies the real issue - controlling criminal impulses in humans, not the otherwise legal instruments they use to commit crimes.
Anyone who doesn't realize and/or acknowledge this isn't thinking, s/he is 'feeling', and our liberty cannot depend upon what anybody 'feels'.

define working together to strip the people of the right to defend themselves!!

There were many reporters there. Some mentioned the Gadsden flag and the "I (heart) S+W signs. Not a SINGLE news agency would cover (in photo or print) any one of the dozens of educational signs. "Lawful Gun Owners are Not the Problem". "Restricting Lawful Gun Owners Will Not Stop Evil" "Teachers are Armed in Hundreds of School Districts- Google it""Guns Save Lives 500,00 to 3,000,000 times each year - President Obama 2013 study https://bit.ly/2cVF49C"......There was also no mention that the "Lawful Gun Owners "crowd was lining both sides of the street an hour before the marchers showed up and they graciously all moved to one side (after being told there was no legal requirement to do so)......

Viewpoint not seen in other media ...On Sunday, 08/26/2018 several very dedicated people completed their 50 mile walk from Worcester to Smith and Wesson factory in Springfield . On their way in they were joined by hundreds of supporters who were brought by bus and joined the march a half mile before the target destination. There were hundreds of protesters from each of two opposing viewpoints. Both were against gun violence but had different opinions on how the goal should be achieved. The differences of opinion could be seen by their signs. One side had “vote out the NRA”and “love children not guns”. The other side : Restricting good people will not stop evil”,”lawful gun owners are not the problem”,Teachers are armed in hundreds of school districts google it” and “guns save lives up to 3,000,000 each year” which included a link to a 2013 study ordered by President Obama. Smith and Wesson had instructed all of it’s employees to stay away from the event and not be involved in anyway. Interestingly, there were over 20 hand painted “I (heart) S+W signs brought in by others.

The "Second Amendment" group (almost half of whom were women) were lining both sides of the street over an hour before the others showed up. It was made clear they had a legal right to be there but all graciously moved over to one side when a police officer suggested it would make the walkers more comfortable and help to avoid any possibility of confrontation. The day was a good example of diverse people expressing different viewpoints and all are to be commended for good behavior.

PS. New laws are useless if current ones aren’t enforced. Major points missed or ignored: Nicholas Cruz used only small capacity magazines and, as a known violent person, was federally banned from owning any and all firearms. Federal law prohibits gun possession by anyone who is violent, uses drugs, has been convicted of driving under the influence (no guns involved) and even owning a medical marijuana card (even if it has never been used).