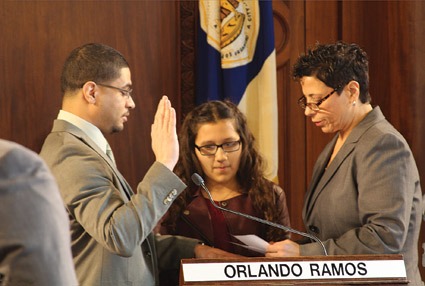 SPRINGFIELD – City Council President Orlando Ramos made diversity and inclusion key elements of both his speeches at the organizational meeting for the council in 2018.

Ramos, reelected as president of the body for the second time, noted that the opening and closing prayer, as well as the performance of music and the Pledge of Allegiance were all led by women. Assistant Clerk of Courts Cheryl Coakley-Rivera administered the oath of office.

Ramos explained, “As a proud single father of a beautiful 13-year-old girl, I see a need for more women in leadership positions. I wanted to take this opportunity to show my daughter, and other young ladies just like her that there are many women here in city of Springfield whom have accomplished great things; and that women can accomplish anything they put their minds to. And if the 20 young participants of the YWAC initiative are any indication of what the future holds for women here in Western Massachusetts, then the future of our city is even brighter than any of us can imagine. Congratulations to all of those young ladies.”

Councilor Kateri Walsh, the only woman now on the council and the longest serving councilor, was elected as vice president.

Ramos spoke of the accomplishments of the 2017 council including the formation of a police and community relations committee, advocating for residency requirements for municipal employees and the hiring an of a new attorney for Code Enforcement.

He closed his address with a message about race by saying, “Finally, I’d like to close by addressing an unpopular, yet very important subject. A topic which has, on a national scale, created much divide amongst Americans. A word in which its mere mention can invoke fear, anger, or even hatred. Admittingly, I debated at length whether or not I should even mention it at all. I am referring to, of course, the topic of race. One thing that I’ve learned-both from experience and observation-is that the topic itself can either divide or it can united. I am hopeful that my words will accomplish the latter.

“For the last four years I have had the privilege of serving on this body alongside Hispanic-American Councilors, African-American Councilors, IrishAmerican Councilors. While we may differ in several ways including backgrounds, culture or even skin tone; I am certain that we can all agree that what bonds us together is our love for the City of Springfield, and our desire to contribute to its success. And I have never been prouder to be a member of this body than I was on August 21st, 2017, when my colleagues and I unanimously voted to support a resolution authored by Councilor Justin Hurst, denouncing bigotry, hatred and terror; and standing up for diversity and inclusion-because that is what the Springfield City Council stands for!”

Ramos concluded, “Diversity is a beautiful thing; diversity is what makes this legislative body one of the strongest and most productive in the Commonwealth. And, in the words of my colleague Councilor Walsh, ‘what makes Springfield a great place to live and work is our diversity.’ Thank you. And God Bless.”