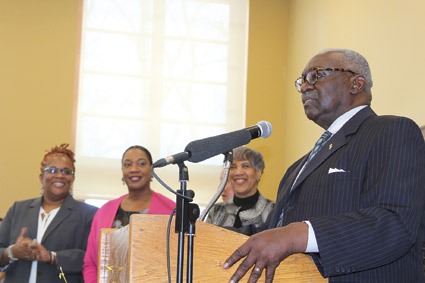 The man of the hour, Raymond A Jordan offered remarks to the public as he took in the new senior center which was named after him for his hard work and dedication to the City of Springfield.
Reminder Publications photo by Jordan Houston.

SPRINGFIELD –  On Feb. 2 local and statewide dignitaries gathered in Springfield at the formal ribbon cutting of the new $12 million Raymond A. Jordan Senior Center (RAJSC) in Blunt Park.  The public was able to view and tour the center and learn about the man behind the center’s name, former state Rep. Raymond A. Jordan.

Jordan and his wife of 53 years, Donna, were both born and raised in Springfield, currently reside in Springfield and are life members of Alden Baptist Church.  The couple has two daughters, Denise and Darlene.

Following his time representing the 12th Hampden District, Jordan served as the Vice Chair of the Massachusetts Democratic State Committee for 30 years and was named Vice Chair Emeritus in 2017.  Aside from his time serving Massachusetts, he’s held Connecticut State Office, serving as the United States Department of Housing and Urban Development New England States Liaison for Faith-Based and Community Initiatives and served as Chairman of the Connecticut Federal Executive Association.

Congressman Richard Neal attended the ribbon cutting, offering a personal story on his friendship with Jordan.

“I think one of the problems that America faces now is that there has become more emphasis on speechifying as opposed to the generation that we came along with, suggesting you were to get things done. Nobody to my memory was a better advocate as a legislature during my time as Mayor for the City of Springfield than Ray Jordan,” Neal said. “He was skilled at what he did. I recall drawing a Congressional District on the floor of his living room on our knees with the legislators who were doing the work on a speaker phone in the Jordan living room on a Sunday night. Needless to say, I got a good Congressional District.”

He continued, “I think that’s part of the skill that goes into this and it’s oftentimes today dismissed because if it’s not about outrage then we don’t pay great attention to that good work that goes on long-term investment. When you look at this accomplishment today I can’t think of a better tribute to Ray Jordan, naming this facility after him.  As we age, the deserving become more important to our memory.”

Though she couldn’t physically attend the ceremony, state Sen. Elizabeth Warren offered her excitement for the new center through a video.

“Ray has been a champion for hardworking families in Springfield and all across Massachusetts for decades. His service in the State House and at the U.S. Department of Housing and Urban Development has made our community and our country stronger,” Warren shared. “Back when I was first thinking about running for the Senate, Ray and Donna and the family welcomed me into their home. Before I was even elected Ray was someone I could count on to have my back. I’m grateful for his friendship, and I’m grateful for his good counsel.  There is no one who brings people together better than Ray.”

Jordan’s daughter Denise introduced her father to the crowd gathered at the event.

“We [Denise and Darlene] have had such a great role model, we have had a teacher, a leader, a disciplinarian,” she joked.     “This is what I see as the culmination of the fruits of my fathers labor.”

With that, resounding applause welcomed Raymond Jordan to the podium.

“This senior center is a game changer, as a former legislator, I always made sure that I represented the interests of our seniors and to have the center named after me is a tremendous honor. It has everything ‘we’ seniors need and more,” Jordan said.

The RAJSC stands at roughly 23,500 square feet and is the first stand-alone building in the history of Springfield that was constructed solely for the purpose of serving the city’s senior population.  The center is state-of-the-art, and was designed with a “retreat” environment in mind.  The RAJSC features a warm environment due to the ambient light as well as crafted trim and woodwork that is carried throughout the facility.

“I am thrilled to complete this project.  My city team, along with the RAJ Senior Center Building Committee has developed a first-class senior center for our residents,” Springfield Mayor Domenic Sarno said. “I felt it was very important to ensure that our residents enjoying their golden years have the opportunity to have an impressive facility to call their own.”

As most senior centers do, the RAJSC will be host to a slew of activities and programs specifically with seniors in mind.  There will be instructional programs for fitness including dance, yoga and aerobics. There is a multi-functional room for crafts, sewing, watercolor arts, dominoes, and is served by a full kitchen.  The kitchen will be host to daily lunches as well as other programs such as ballroom dances, movies and more.  For those who enjoy playing pool, the center boasts two pool tables.  The RAJSC has a computer room for seniors which will offer training on computer use and internet classes.  Not to be lost in the mix of exciting activities, for seniors who prefer a quiet atmosphere, there is a room for individuals who would rather read, relax or flip through TV channels.