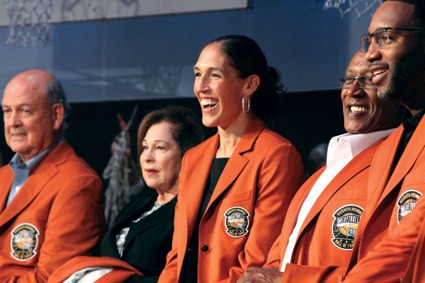 Rebecca Lobo enjoys a laugh while sitting with fellow members of the Hall of Fame Class of 2017. Reminder Publications photo by Chris Maza

SPRINGFIELD – When she looked up toward the dome adorned with the faces of past greats enshrined at the Basketball Hall of Fame at the jacket presentation and press conference the day before the 2017 Hall of Fame Enshrinement Ceremony, Rebecca Lobo was taken aback by something – herself, looking back at her.

“I was kind of looking around at all of the faces and I didn’t realize that ours were up there,” she said. “This was the first time I saw it and it was just ridiculously cool. I think it’s kind of hitting home, the significance of it, because I went to the old Hall of Fame as a kid and kind of understood the significance of what it meant, never thinking that it would be something that would happen to me.”

Lobo smiled and her eyes were wide as she recounted tales of visiting the first downtown Hall of Fame as a child during the press conference.

“Today, to see that, I’m so proud of it and so thankful for this opportunity and I’m just hoping the people who have been with me through this journey from the time I was in Southwick all the way through now are taking pride in it,” she continued.

Lobo was officially immortalized at the Hall of Fame this year, elected by the Women’s Committee as a contributor, a fitting designation because her career was defined by much more than great play on the court.

Before becoming a driving force in creating one of the most dominant sports dynasties at any level with the University of Connecticut women’s basketball team and becoming one of the first stars in the fledgling WNBA, Lobo was a local legend in high school in Southwick.

Her 2,740 points stood as a state record for nearly two decades. But what’s more, she helped inspire the growth of girls’ basketball in the area.

Every step of her journey, Lobo has helped spearhead the development and increased interest in the women’s game.

The UConn Huskies’ 1995 undefeated run to the NCAA Championship is credited as the spark that launched women’s basketball into a public spotlight. The concept of regularly broadcasting women’s basketball on television was a novel one taken on by Connecticut Public Broadcasting. The National Championship that secured the Huskies’ perfect season was an afternoon game on CBS.

In 1996, ESPN began broadcasting the women’s tournament and in 2017, the final in prime time drew 3.9 million television viewers and had the most online streaming viewers in a women’s final ever.

The 1996 Olympic team was a dream team in its own right, running through the field in dominating fashion to win gold in front of an American audience in Atlanta.

Growing up and even through college, major professional women’s basketball didn’t exist; and when it formed, Lobo’s WNBA had eight teams. It is now up to 12.

Lobo, now 43, has seen this development firsthand both as an analyst for ESPN, and as a mother.

“The women’s game is completely different now from when I was a kid, not only at the professional level … to the way the women’s college game is being played, the attention that it gets, the coverage that it gets,” Lobo said. “It even filters down to my kids. I signed up to play basketball for my town in fourth grade or third grade and they said they couldn’t have a girls team because they didn’t have enough girls. And now my kids sign up and there’s enough in one town to field a whole league of teams.”

Now with her photo among other basketball legends and an orange jacket over her shoulders, Lobo said she has come to appreciate the role she played.

“Today, as I get older and have been able to gain a little bit of perspective, I understand now what I didn’t understand as things were happening to me. I understand the importance and the significance of that 1995 Championship Team. I understand the importance of that ’96 Olympic team and then the beginning of the WNBA in 1997,” she said. “I see things differently now because I am a mom with three daughters and the older two play basketball. My oldest daughter loves [Seattle Storm forward] Breanna Stewart and my 11-year-old wears her [New York Liberty center] Tina Charles jersey with pride. Twenty-two years ago, that wasn’t possible for kids of that generation … It makes me feel very, very proud of my little role in those teams and what it has led to.”