Report: Apartment in South Congregational Church has only minor violations 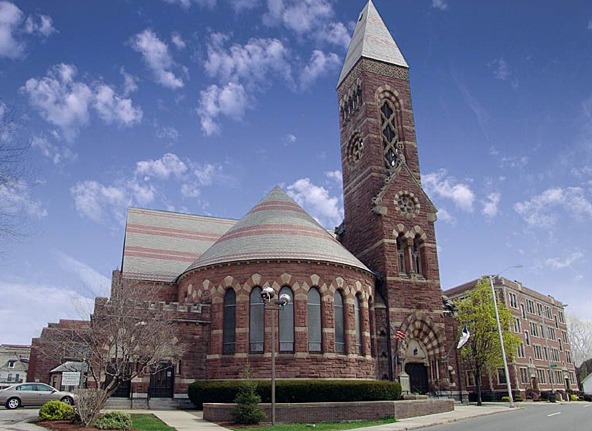 The South Congregational Church in Springfield is currently housing Gisella Collazo, the Peruvian illegal immigrant who is now living under a sanctuary program at the church.
Photo Credit: Pinterest.

SPRINGFIELD – Whether or not Mayor Domenic Sarno will continue in his efforts to remove the tax exempt status of South Congregational Church is not known at this time.

In response to an inquiry from Reminder Publications, Marian Sullivan, the mayor’s communications director, simply replied, “No further comment at this time.”

Sullivan’s comment came after the release of an inspection report of the church’s apartment in which Gisella Collazo, the Peruvian illegal immigrant is now living under a sanctuary program at the church.

Building Commissioner Steve Desilets sent the following report to the mayor as well as City Solicitor Edward Pikua on April 5: “At 9 a.m. this morning I performed an inspection along with Lieutenant Richard Martin from the Springfield Fire Marshall's Office of the dwelling unit being used to temporally house a family at the South Congregational Church. Our inspection was performed today to establish whether or not the area being utilized to house the family was an existing use and meets all the minimum requirements of the Building, Fire, and Sanitary Codes for the family now being housed.

“The inspection found that the area being used appears to be an old existing housing unit utilized by the church, containing a full kitchen, bathroom with shower, sinks and toilet, two bedrooms and common living area. The attorney representing the church agreed to send a letter to me stating this use for a single family unit will not be increased to accept any more families or occupants with the understanding that would than constitute a possible change of the accessory grandfathered use R4 to an R2 full Shelter use. The attorney also agreed to send me historical documentation of the existing dwelling unit and its use for our records.

“The unit did pass the inspection for the minimum life safety and sanitary requirements, except for some minor violations the can be quickly fixed, missing window crank hardware, window stuck closed, non code compliant locking device on egress door, blocked egress door by a table.

“The Building Department will send a violation notice to the church for the violations found and will re-inspect for compliance in seven days.”

Sarno sent out this statement along with the report by Desilets: “Building Commissioner Steve Desilets and Fire Lieutenant Richard Martin have done their jobs and their report speaks for itself. We just want to be sure that public health and safety issues are being complied with.”