Sarno appeals to community for help in stemming violence 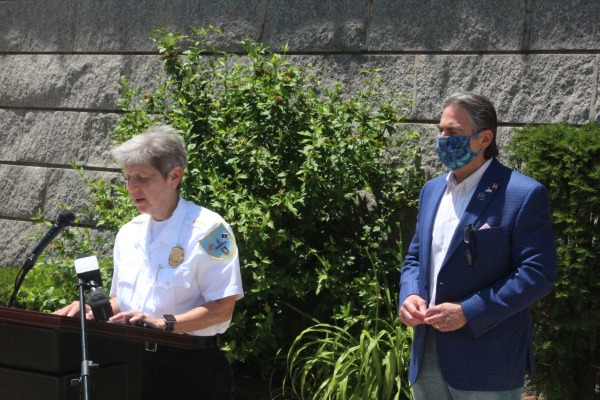 Police Commissioner Cheryl Clapprood spoke about the increase in violence the city has seen and her department’s response.
Reminder Publishing photo by G. Michael Dobbs

SPRINGFIELD – Police Commissioner Cheryl Clapprood said last week was a “tough week” in the city with three homicides. But an arrest in one of those killings was made on June 18.

Clapprood and Mayor Dominic Sarno addressed the “uptick” in violence at a press conference on June 19.

According to Ryan Walsh, the spokesperson for the Springfield Police Department (SPD), “The Springfield Police Department’s Homicide Unit under the direction of Captain Trent Duda applied for and were granted an arrest warrant for Isaiah Calderon on June 17 for the June 16 murder of Michael Paolercio. Mr. Calderon shot Mr. Paolercio near the intersection of Horace Street and Orange Street Tuesday night around 11 p.m. Mr. Paolercio was transported to Baystate where he later died.

“Thursday night at approximately 8:15 p.m. members of the Springfield Police Department’s Warrant Apprehension Unit under the direction of Cpt. Brian Keenan, Mass State Police VFAS Unit, U.S. Marshal’s Task Force and North Adams Police located Mr. Calderon hiding in a closet in a home on Blackington Street in North Adams and he was placed under arrest.

Clapprood also spoke of the arrest of Jeremy Garcia in Amherst on a warrant for a pistol-whipping on June 12 on Boston Road. He had also been involved in several other gun incidences.

Sarno said of the department’s efforts, “This was darn good police work.”

He noted a conversation with a local minister who asked him to “stop the bloodshed.” Sarno said, “The police can not do it alone” and called for community support.