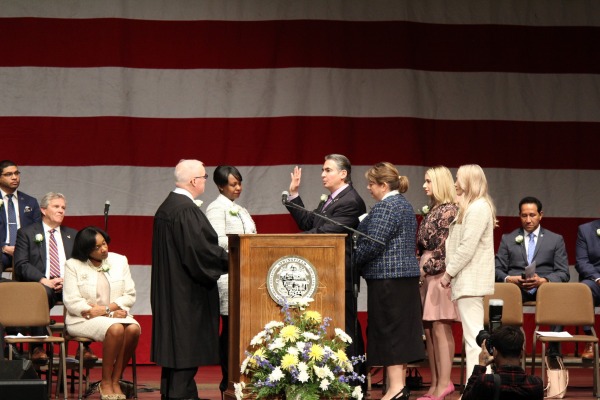 Springfield Mayor Domenic Sarno was sworn in for his fifth term on Jan. 6 in a public ceremony at Symphony Hall.
Reminder Publishing photo by Danielle Eaton

SPRINGFIELD – Domenic Sarno, the mayor of Springfield, became the longest-serving mayor in the city’s history on Jan. 6 when he was sworn into office for the fourth time.

Since being first elected in 2007, Sarno has served two two-year terms and two four-year terms. The Jan. 6 swearing in signified the beginning of his third four-year term.

After taking the mayoral oath and being sworn into office, Sarno began by stating how “proud” he was and how when he first took office, he “never imagined I could achieve this milestone.”

Sarno then went on to thank those who had placed their trust in him as the mayor of Springfield and cited some accomplishments the city had achieved during his tenure as mayor. Achievements noted included being “fully recovered from the worst fiscal crisis,” “substantial gains in the quality of public education,” “reduction of overall crime,” “leveraging over $4.7 billion in economic opportunities” that he noted created more than 5,000 jobs and having the city’s first African-American police chief, who has since retired.

Sarno also stated that during his administration both MGM Springfield and the CRRC manufacturing plant had been erected and Union Station had been revitalized. All of these projects had required “extensive collaboration,” Sarno added, as he thanked members of the city, officials and others for their support and assistance.

Despite citing a decrease in overall crime, Sarno reassured citizens he planned to “remain vigilant” and that “public safety will always remain my number one concern.” He also told citizens, despite entering his fifth term, they shouldn’t “expect to see any letup.”

He said, “My love for this city and this job burns brighter than before,” and promised to continue “persevering in pursuit of common goals.

“There’s always work to be done,” he said as he challenged residents to “step up” on a personal level to “contribute to the well-being of our city.”

In addition to addressing Springfield citizens, Sarno also took a moment to recognize former city councillors Kenneth Shea and E. Henry Twiggs in addition to his own mother and father. Sarno recognized the service of Shea, who after years of serving on the council retired after the Nov. 2019 election, and Twiggs, who passed away in late November after serving many years as the councilor for Ward 4.

Sarno then became emotional as he dedicated his inauguration to his mother, Clara, who passed away in 2018, and his father, Alfonso, who celebrated his 84th birthday the day of the inauguration. Alfonso, Sarno said, was unfortunately unable to attend the swearing in due to his battle with cancer.

Sarno wished his father a happy birthday and said of his parents, “I am so very, very proud of them and grateful for their love and support.”

Sarno then turned to his wife, Carla, and two daughters, Cassandra and Chiara, and thanked them, saying he knew it “wasn’t always easy to have a mayor in the house.” In closing, Sarno said he was “looking forward to the next four years.”