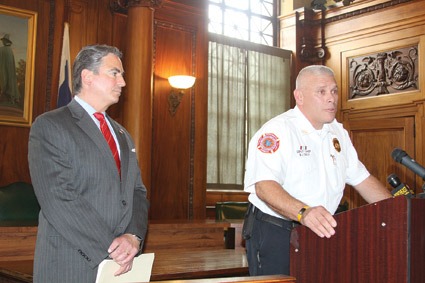 New Fire Commissioner Bernard “BJ” Calvi speaks to the press with Mayor Domenic Sarno looking on at the announcement of his appointment on Oct. 26.
Reminder Publications photo by G. Michael Dobbs

Mayor Domenic Sarno announced Calvi as the finalist to succeed Fire Commissioner Joseph Contant, whose contract was not renewed by the mayor.

Calvi added at a Oct. 26 press conference, “Everyone wants to make it to the top of the ladder and those jobs are few and far between.”

He will be assuming command on Jan. 24, 2018 with a five year contracted that has been negotiated and signed by all parties. He is being paid $145,000 a year. Sarno added there would be a formal swearing-in ceremony closer to Calvi’s start date.

Calvi is a Springfield resident and has served as Agawam’s Deputy Chief since 2012. He joined the Agawam Fire Department in 1995 as a firefighter and was named lieutenant in 2002. He is a certified paramedic and has completed multiple training programs through FEMA’s Emergency Management Institute, the Center for Domestic Preparedness, and the Security and Emergency Response Training Center and the International Association of Arson Investigators encompassing terrorism and explosion response, scuba rescue, electrical systems, safety on scene and more.

Sarno said Calvi was one of six finalists of the 38 people who applied during a national search. Each of the six finalists – two internal candidates from within the Fire Department and four from the outside – were interviewed by Sarno and Director of Human Resources and Labor Relations Atty. William Mahoney, Chief Administrative and Financial Officer TJ Plante and Chief of Staff Denise Jordan.

“It was very extensive,” Sarno said. He added that Calvi “had total command” of the answers during the interview.

Calvi said that going from the Agawam as a deputy chief to the Springfield as the commissioner would not be a difficult transition.

“Leading one department is the same as leading another,” he said.

Calvi said he would be evaluating the conditions of capacity of the equipment of the department and noted the staffing is at full level.