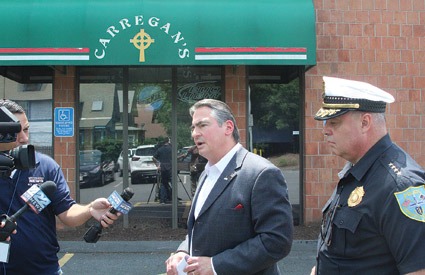 SPRINGFIELD – If Mayor Domenic Sarno has anything to do with it, Carregan’s Lounge, the long-time bar at the rear of 155 Maple St., will soon be closed.

In an unusually emotion-filled press conference, Sarno and Police Commissioner John Barbieri spoke of the many incidents that have happened in the bar’s parking lot.

The emotion came from one of the tenants of the building, an office condominium, who confronted Sarno. The tenant insisted the troubles were not from the bar, but from people who congregated in the parking lot after the bar closes.

“I want to see the police come by here every night,” the tenant insisted.

With a sheaf of papers in his hand, Sarno said he had the proof to show the bar was the source of the illegal activity.

Sarno said of the last incident the bar staff were “obstructive” to Springfield police.

In  a press release, Sarno noted “Between January 1, 2018 and June 22, 2018, there were eight reported victims of aggravated assaults at 155 Maple St (Carregan’s). One of the assaults involved homophobic slurs and an attack against victim who suffered a jaw that was broken in several places. Four incidents involved victims being shot (total of five victims). In one incident, a victim was stabbed. “

Sarno compared Carregan’s with the Kickback Lounge/Club Pandora which had been the subject of numerous complaints.

“I can not have these kinds of dangerous situations,” Sarno said.

Sarno has asked the Board of License Commissioners to consider revoking the license.

The commissioner said the Springfield Police are willing to work with businesses and Carregan’s should have a better camera system,and hire both private security and off-duty officers.

“Of these calls, 11 involved acts of violence. Nine  calls involved Shots Fired or ShotSpotter (this increases to 16 Shots Fired/ShotSpotter calls if the radius is expanded to 500 ft).”

Reminder Publications returned to the bar for comment  when it was supposed to be open, but it remained closed.