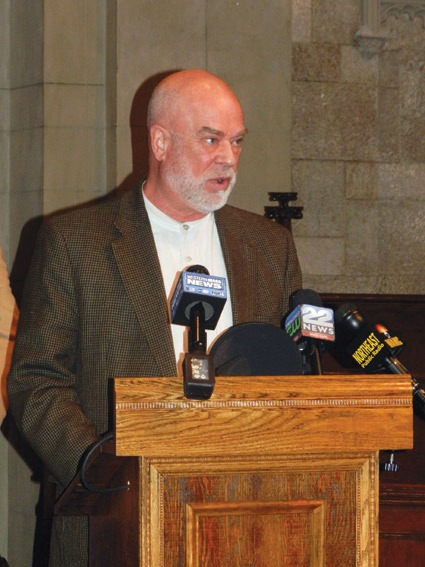 SPRINGFIELD – The mayor of Springfield has not only condemned the announcement of the first illegal immigrant receiving sanctuary in the city, he has announced steps to evict her from South Congregational Church and to seek a means to strip the tax-exempt status of the church.

Sarno initially reacted on March 26 within an hour of the announcement that an undocumented immigrant would be provided sanctuary in South Congregational Church through the Springfield Interfaith Sanctuary Coalition. Her two children, who are both American citizens, will accompany her.

Sarno followed up on March 27 with another statement to several city departments: “Please re-inspect the property in question for illegal housing aspects. Also, please start the review process to strip them of their tax exemption status. Please again pursue to the fullest extent of the law. Thank you and God Bless.”

There was swift reaction to Sarno’s second statement, and among them was one for City Councilor Jesse Lederman that read in part: “Our nation is and has always been a nation built by immigrants who come to the United States seeking a better life and future for their families. During our country’s over two centuries of history, immigration policy has evolved drastically and continues to evolve today as community members and many of our nation’s leaders continue to advocate for a fair immigration system that recognizes the reality that the immigrant community in the United States, both documented and undocumented, contributes greatly to our communities and economy, and they are our neighbors, our friends, and our family members.

“At any given time, many of our ancestors could have been considered “illegal” immigrants by current measure.

“In light of this, it does not make sense to prioritize deportation for non-criminal undocumented immigrants whose only crime was seeking the American dream.

“South Congregational Church is continuing a long tradition of religious institutions in our United States going beyond politics to stand up for what is truly just and morally right. This religious institution has existed in Springfield since 1843, and prior to that was a part of our historic Old First Church in Downtown Springfield. Their offer of sanctuary to a mother with no criminal record who is attempting to legally resolve her immigration status and remain united with her husband and children who are American citizens does not on its face pose a threat to the Public Safety of our community … I will not support any efforts to utilize our municipal government apparatus to harass, intimidate, or otherwise attempt to interfere with South Congregational Church’s constitutional first amendment rights.”

City Councilor Adam Gomez posted on Facebook, “Can’t fathom the mind of a man who targets a church during ‘Semana Santa [Holy Week].’ During this week I stand with all of my people who are immigrant, refugees, and/or displaced!”

Known only by her first name, Gisella, Tara Parrish, of the Pioneer Valley Project, said the woman came to this country from Peru in 2001 and has been employed at jobs within the Springfield region. In 2005 she married an American citizen and she was successful in obtaining a work permit. She does not have a criminal record and is trying to become an American citizen. She does have an attorney who is working on her half, Parrish added.

Sarno’s March 26 a written statement read:  “Well their recruitment efforts have paid off for them in defiance of the edict that we are not a sanctuary city. As stated prior in June 2017, our city’s code enforcement inspection and public safety teams upon visit deemed the church property unsuitable to house individuals/families under the state’s sanitary code. They are in violation of building and housing codes and proper non-taxable use of their property. Our city inspection teams will be notified. I am disappointed that they would use and exploit this family for their own causes. Now, I am not a cold-hearted person and do have compassion for the family in question, but there must be a clear path to American citizenship, whether it’s this case in Springfield or in other parts of our country. Being first generation, it’s simply not fair to all those immigrants, including my parents, who played by the rules and followed the legal immigration path into America.”

There has been no time announced when the city may conduct the inspections that could lead to an eviction.

Gisella joins an undocumented person who is in sanitary in Amherst and another in Cambridge.

At the press conference Parrish could not estimate the length of her stay in the church.

Parrish added Gisella would not leave the church until she is safe from being detained by ICE (Immigration and Customs Enforcement).

Rev. Tom Gerstenlauer, pastor of South Congregational Church, said the action taken by the Springfield Interfaith Sanctuary Coalition is not political, but rather it is “a faith statement.” The church and the coalition had no communication with the mayor’s office and Gerstenlauer added initial reaction from his congregation was “mixed,” but now is unified in favor of the action.

Gisella and her two children will be living in an apartment in the church complex. When asked if there would be provisions to allow her or her children to go outside, Gerstenlauer said there were trying to work that out.

The Rev. Jason Seymour of the Unitarian Universalist Society of Greater Springfield asked, “Is it reasonable to remove a mother from her children because of paperwork?”

After impaling The Christ on Golgotha and running the king/pope "Wall Street of slavery" for over 2,000 years, the same 9/11-committing faction now staging the mass shootings and bombings to terrorize, disarm, and enslave the sovereign American Electorate, murdered the Book of Revelation's "two martyrs lying unburied in the street," JFK&MLK to make us papal catspaw in their Vietnam slave plantation after JFK ordered the end to our service as papal catspaw with 120 dead six weeks before the Roman Catholic CIA/FBI killed our president (viz. 'Hunt v. Marchetti').

Their satanic stratagem for using an organized army of pawns for invasion and conquest of the prophet Isaiah's actual "Zion," God's prophesied "Promised Land," as biblically foretold, by "Gog" and "Babylon," identified by our founder and prophet Mr. Jefferson as "the real Anti-Christ" "engine for enslaving mankind," is openly publlished for every Patriot eye to see: "National Pastoral Plan for Hispanic Ministry."

The visible church has fallen into apostasy: this is the Apocalypse. The pedo homo Beast is going down. The Wall shall kill it, preventing its abilitiy to refill its pedo priest scandal-emptied pews with surplus slaves from Rome's teeming priest-molested slums and brothels of enslaved Latin America, as our Vatican banker/FedScam Rothschild/Rockefeller satanic ruling false-elite wants America to become.

We are one People under the one Creator, God Almighty.

First among equals Elect of the sovereign People Mr. Trump is anointed of God, our Sovereign that the Beast long attacking us be cast down. Viz. Ezekiel 38:11.