Sarno ready for challenges of next four years in office 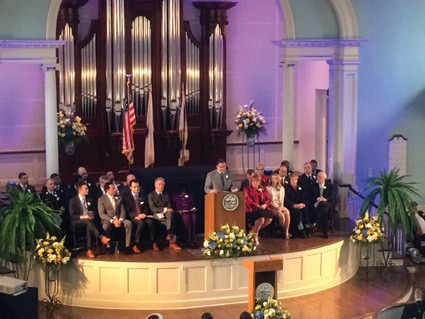 Mayor Domenic Sarno was flanked by elected officials and members of his family during his inaugural ceremony at Old First Church.
Reminder Publications photo by G. Michael Dobbs

SPRINGFIELD – Mayor Domenic Sarno said in his inaugural address he is ready for another four years in office.

He said, “Rest assured, I am energized and eager to engage the challenges that will arise over the next four years. I pledge to lead us ever forward with a steady hand as we strive to achieve our full potential as a community. I am more committed to this mission than I have ever been. And I am more optimistic about our collective future than I have ever been.”

Sarno took the oath of office on Jan. 4 during a ceremony at Old First Church opposite City Hall.

He has already served eight years in office. The completion of the new term of four years would make him the longest serving mayor in the city’s history.

While he did not announce any new initiatives during the address, the mayor did review some of the city’s recent accomplishments.

When asked by Reminder Publications after the ceremony why no new programs or initiatives were discussed, he said that instead he “wanted to set a the tone.”

Sarno said there are few medium sized cities that have the kind of economic growth Springfield is currently enjoying in the form of the MGM casino, the CRRC rail car company building its factory on Page Boulevard and the renovation of Union Station.

Referencing the current opioid crisis, Sarno said he would continue to move on improving the economy, creating opportunities to “empower” people “so they are less likely to get caught in drugs.”

He said the city’s efforts require the benefit of an ongoing partnership with state and federal agencies.

During the address that was attended by about 100 people, Sarno said, “We’re in the midst of a five year program involving over $2.7 billion – that’s ‘billion’ with a ‘b,’  – in private and public investment. This investment will re-make the very face of this city and position us for the future.

“Our downtown is being reinvented with two mega-projects under construction: a revitalized Union Station and a world-class MGM resort casino. Other key projects involve growing institutions of higher education, an exciting new state-of-the-art innovation center, and much- needed market-rate housing all in the core of our central business district.

“Our manufacturing base, the historical competitive advantage of this city, is now on the rebound with the new CRRC rail car manufacturing facility being built in East Springfield. We fully expect that this plant will create more spinoff manufacturing by Springfield-based entrepreneurs in the years to come.

“Our neighborhoods are going through a resurgence with new and rehabilitated housing under construction throughout the city and our parks, libraries and museums system is second to none.

“Our crime rate is down. But let’s be candid, we still have a long way to go in controlling crime. Drug dealers and criminals be forewarned, we are coming after you – all of you – in a relentless way. But, we can’t do it alone – I need your help.

“Our public schools are on the rise and the test scores prove it. But we still need to do better for our kids, and we will.”

He called for city residents to “rededicate ourselves to building an even greater city of Springfield.”

The mayor added, “I believe that, working together as a team, we can create a thriving city: where all our citizens are safe in their homes and on our streets; where all our kids can pursue quality educational opportunities from pre-school to college; where all our residents have access to employment opportunities that take full advantage of their talents and are paid a living wage; where all our neighborhoods are great places to live and to raise a family; where all our residents enjoy a downtown that is bustling as the hub of commerce, government, entertainment and the arts; where the quality of life for all of us is the equal to or better than any other medium-sized city in the United States of America.”