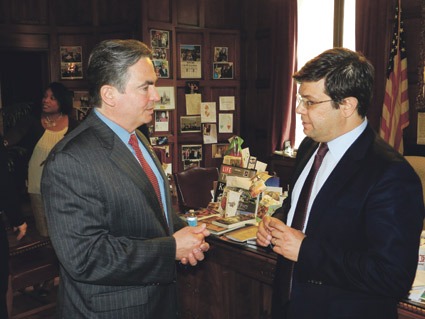 Springfield Mayor Domenic Sarno met with Turkish Consul General Ömür Budak on May 22. Budak reached out to the mayor in recognition of the increasing population of Turkish immigrants in the greater Springfield area. There are approximately 3,000 Turkish people in the area, which is second only to Boston in the size of the population.

“I wanted to pay a courtesy call to honor the mayor,” Budak said. The counsul also noted the  “warm welcome”  Turkish students have received at the area colleges.

A career diplomat, Budak was appointed General Consul to Turkey in 2014 and is based in Boston. From 2012 to 2014, he served as Deputy Chief of Staff to the president of Turkey. Previous to that he served as counsellor, Permanent Mission of Turkey to the United Nations in New York City; head of section at Deputy Undersecretary for European Affairs, Turkish Ministry of Foreign Affairs; and second secretary, Permanent Representation of Turkey to the European Union in Brussels, Belgium.