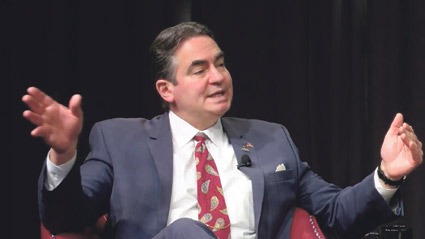 SPRINGFIELD – Springfield Mayor Domenic Sarno believes that with the ongoing economic developments in the city Springfield has turned a corner.

Sarno told this writer during an interview to be aired on Focus Springfield that before his administration the city was facing bankruptcy and now the city has the highest bond ratings in its history.

Sarno noted the three largest economic development projects: MGM Springfield, the CRRC rail car factor and Union Station, but said the next step will be auxiliary businesses that benefit from these three projects.

“Spin-off is key,” Sarno said. He noted for example Falvey Linen, a $10 million development, came to Springfield because of MGM.

The mayor noted that the Union Station project is “an anchor for the North End” and has “pushed the dialogue” for the creation of east-west commuter rail.

He noted the CRRC building “has gone up quickly” and would be a business that could support a number of local vendors.

Besides the traditional manufacturing the CRRC represents, Sarno noted the work being done on the Innovation Center on Bridge Street the future home of Valley Ventures Mentors, the entrepreneurial organization that has helped a number of start-up businesses.

He said downtown college campuses help to build “an eclectic mix” with the addition development of art and culture.

Sarno noted the evening of the Springfield Jazz Festival renowned comedian Louis CK was appearing at the MassMutual Center resulting in 12,000 in downtown with no problems other than long waits at nearby restaurants.

Improvements to city parks and the creation of a new South End Community Center add to the development scene in the city, he said.

Sarno said in the effort to re-development the Entertainment District downtown, he and Kevin Kennedy, his chief development officer, successfully applied for a Department of Housing and Urban Development loan pool of a $1.5 million “to bring in restaurants, established restaurants” into that area.

“It’s already started to bear positive fruit,” he said, explaining Victor Bruno, the owner of Adolfo’s, has shut down several bars in his building to re-develop the space into restaurants.

The Basketball Hall of Fame recently announced $25 million in renovations and upgrades to its facility as well.

Sarno said that he is ready to work with the Trump Administration on its urban development program and he is eager to work with the state and federal governments on the examination of eliminating the Interstate 91 viaduct and lowering the highway to below street level to allow a greater connection to the river.

“My whole thing is vibrancy in the arts and culture and job with people moving around, not only vehicular traffic but pedestrian traffic, which will help the businesses and the marketers say now they see numbers,” Sarno said.

Although the city relies heavily on state allocations for the school and municipal budgets, Sarno said the latest cuts from Gov. Charlie Baker has not affected the city, but he recalled how mid-budget, or “9C,” cuts made in 2009 resulted in reduction of city employees and services.

He believed those cuts did make the city stronger “going down the road.”

Sarno is hopeful the next budget will be sufficient. The work done by his financial team “is not sexy behind the scenes … but it allows me to do those sexy projects.”