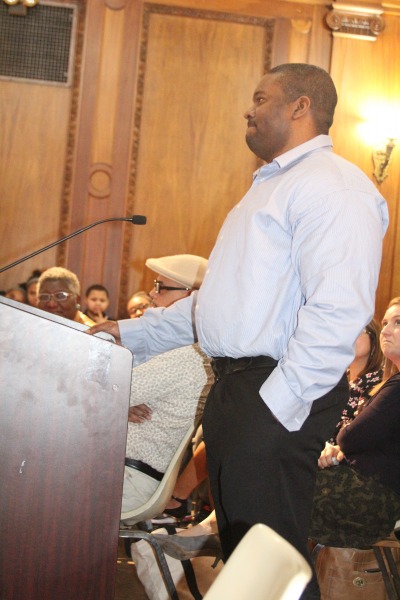 Ahmad Sharif’s School of the Noble Warriors trains young people in martial arts with an emphasis on residents of the Old Hill neighborhood.

The school was founded in 2007 and includes children from ages 5 to 17. Sharif said as a police officer he “saw a lot of children in need of resources every day.”
The program is operated at the Elias Brookings Elementary School.

The School Committee’s Vice Chair Christopher Collins told Sharif, “You are representative of our police department.”

Gresham thanked him for his “compassion and love for our students.”

The committee also heard a report from the Springfield Promise program, which Superintendent Daniel Warwick said has made “tremendous progress.”

The program’s administrator, Apelila Joseph, explained the program is designed to support students to be prepared for college by educating them about the college financial aid process and assisting them to find the financial means to make post secondary education affordable.

She explained the program meets with every senior to understand his or her post high school plans and to assist them in completing the Free Application for Federal Student Aid, better known as FAFSA. Joseph added the application is “more challenging” for low-income students.

She shared that in 2016, 50 to 54 percent of students in the district completed the FAFSA application. In 2018, 64 percent now complete it. The state average is 67 percent.

The program culminates with services for high school seniors, but it actually starts with presentations in the ninth grade about the importance of preparing for college early. There are also presentations in the 10th and 11th grade on financial aid issues and scoring well enough on MCAS to win a scholarship.

The program also offers support services for graduates during the summer between high school and college.

The program also has a “Last Dollar Scholarship” that helps students pay for college. The class of 2018 had 109 awardees with scholarships that ranged from $500 to $2,500.

Warwick added, “They do a lot of great work.”

Warwick also announced statistics for graduation and dropout rates have been released and will be discussed at an upcoming meeting.

“It’s more great news for Springfield, “ he said. “The numbers are still moving in the right direction.”

He said the graduation rate is now at 76.9 percent and noted the district has “narrowed the gap with the state [average].”