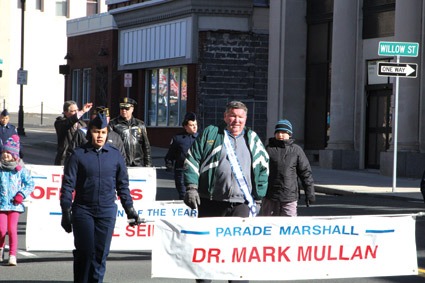 Dr. Mark Mullan was named the parade marshal for the Veterans’ Day parade conducted on Nov. 11, while Paul Seifert, who works in the Springfield’s Veterans’ Office, was named Veteran of the Year.

Mayor Domenic Sarno said of Mullan he “not just heals [veterans] physically, but spiritually” while citing the Seifert’s work ethic and avoidance of attention by saying, “he just does his job.”

Mullan, who has practiced medicine for 35 years, is the son of a World War II vet.

He recalled how seeing vets march in the July Fourth parades as a child made him interested in them.

He explained his own father died when he was 9 years old and Mullan didn’t understand until later of his father’s own accomplishments as member of the military.

Referring to the city’s veterans, Mullan said, “The word ‘hero’ is sometimes overused but not here in Springfield.”

Charly Lawrence, the chair of the Springfield Veterans’ Activities Committee, said of Seifert, “He likes to get things done, but stands in the shadows.”

Seifert said that although he has been working with veterans for more than a decade, “it hasn’t been work for me, it’s been a pleasure.”

He said he is proud of the support work various veterans organizations called on younger vets to join organizations such as American Legion and the Veterans of Foreign Wars, which have lobbied for veterans’ rights.

He called on younger vets to “vary the torch forward.”

Both Mullan and Seifert received citations from the Springfield City Council and city’s legislative delegation and led the city’s parade.