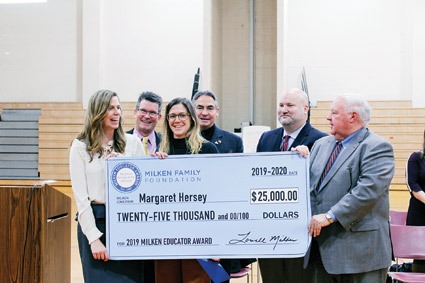 SPRINGFIELD – On the afternoon of Dec. 4 the students and staff of the Springfield Honors Academy at the High School of Commerce packed into the gym, prepared for a special presentation from the Massachusetts Commissioner of Education, Jeffrey C. Riley.

Curious students speculated and theorized what the presentation was about as they were supervised by their teachers. What no one knew – not even the staff – was that one of their very own was being recognized for her teaching with a national honor, the Milken Award.

When ninth grade English teacher Margaret “M.E.” Hersey was announced as the winner of the honor and $25,000 award, cheers erupted across the gym as students cheered and chanted her name. Hersey said after receiving the award she was “overwhelmed” but “humbled and grateful.”

Hersey told Reminder Publishing she had no idea that she’d be receiving the award and was as surprised as everyone else in the room. “I was very surprised, I had no idea at all. There were lots of rumors from the kids actually about what was going on today, so I had no idea,” she said. “I’m feeling a bit overwhelmed by all of it, but really humbled and I feel really thankful.”

However, as Principal Grace Howard-Donin noted earlier in the assembly, Hersey couldn’t accept the award without acknowledging the hard work of her fellow coworkers. “I know she doesn’t want to accept this award alone, but she has to,” Howard-Donin joked during the assembly’s closing.

Later, Hersey recognized the many hardworking educators in the field and said, “There’s so many teachers who work their entire careers without any kind of recognition and so I truly, truly appreciate it.” She continued, “I guess I’m thinking about all the other educators I know that I’ve worked alongside with for years that have been huge inspirations to me.”

A ‘12 alumnus of UMass, Hersey began her teaching career six years ago in Worcester. There, she taught Advanced Placement (AP) Art History. Hersey, who lives in Northampton, joined the Honors Academy when it opened in 2017, where she teaches English Language Arts and Demystification of the Arts.

The class, Demystification of the Arts, is Hersey’s own creation and combines art and literature and speaks to her devotion to enhancing her student’s learning experience. She also offers the students the opportunity to lead Socratic seminar-style discussions in class; challenges students with elevated conversations, projects and texts; and goes out of her way to add diversity to the classroom’s reading list of books.

Though just a three-year veteran of the school, her students have already made incredible strides in their learning and have shown great progress in academics. In fact, during the school’s first year, students in Hersey’s class improved their MCAS scores by 510 percent.

In addition to creating an entirely new class offering, Hersey also is the school’s teacher leader for curriculum, has led professional learning services on curriculum development for the school staff, has influenced disciplinary systems within the school and started a Reflection Team for students to work through cultural management.

Outside of that, she also runs the Adventure Club, takes students on hiking field trips to the Berkshires, brings students to art museums and has taken students to City Hall for recognition. A press release from the Milken Educator Awards said in addition to her teaching and educator responsibilities Hersey also “models kindness and listens to her students without judgement.”

Though Hersey puts in a lot of hard work in and out of the classroom, she said she’s been lucky to have taught the kids she has throughout her years as an educator thus far.

“The kids this year they’re amazing. They’re the best kids in the world. They are joyful and interesting and vibrant and all of the things a teacher I guess hopes for in a classroom,” she said. “I’ve been really, really lucky with the students that I’ve had my whole career in education and this year in particular.”

When Springfield Mayor Domenic Sarno asked her what advice she’d give the students she said, “Keep working hard. You all have in you what you need to be successful as long as you stay steady on the course.”

In addition to receiving $25,000 to spend on whatever she wishes, Hersey will also become a member of the National Milken Educator Network, attend the 2019 - 2020 Milken Educator Forum in Indianapolis in March where she will network with other educators and share ideas with leaders from across the country, and will receive mentorship from a previous Milken Award winner.

Hersey is just one of 40 educators chosen to receive the national honor this year, and the only Massachusetts honoree this year. The award is unique in that the educators cannot apply or nominate others. Instead, the candidates are selected each year through a “confidential selection process” and then reviewed by panels appointed by the state’s department of education.

The awards, which have become known as the “Oscars of teaching” first began in 1987. Since Massachusetts joined the program in 1997, more than $1.1 million has been awarded to educators across the state.