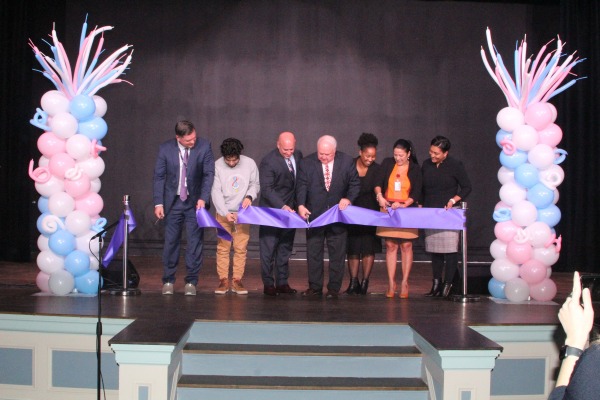 SPRINGFIELD – The art deco auditorium at the long-vacant Masonic Temple on State Street is in use again – as is the rest of the building.

The imposing structure is now the home of the Springfield Conservatory of the Arts and it was officially opened on Oct. 30 with a ceremony that included speeches from elected officials and performances from its students.

He said in remarks before the performances the inspiration for the school came about when Heriberto Flores, chairman of Partners for Community, brought a group of Springfield educators to see a similar school in San Juan, Puerto Rico.

The work to make the school a reality started in 2012. The school has been in existence for the past two years but housed to in separate buildings.

The school serves about 400 students in grades six through 12 and according to the school’s website, the programs at the school “enables students to focus on their interest in the arts, whether they are dancers, authors, painters, sculptors, musicians, poets, playwrights, illustrators or actors. All students receive classes in Dance, Music, Visual Arts and Drama, as part of their everyday schedule.”

Azell Carvaan, the district chief communications officer, described the school as “a fusion of traditional education and arts education.”

Warwick called the school a “very complex project.” He said essentially the building was gutted with the exception of the auditorium and the lobby area. Initially it was thought only part of the building would be used, but instead school officials realized the entire building would house the school, he added.

Julie Jaron, director of visual and performing arts for the district, said a recent report from the Brookings Institute noted that arts education has decreased at the same time that mandatory testing has taken a more prominent place in education. She said school districts from around the country have been calling to inquire how Springfield was able to make such a school a reality.

“This is not a building, but a living breathing work of art,” Jaron said.

Warwick credited Mayor Domenic Sarno for coming up with city funds to finish the renovation of the building and to pay the $1.5 million lease for the building.

The building was constructed in 1923 and was placed on the National Register of Historic Places in 1983. The application for the Register had a detailed description of the building when it housed the Masonic Temple.

“The interior of the Masonic Temple is made up of four main floors and two mezzanine floors. The lowest floor is mostly devoted to an extensive banquet hall, which accommodates 1,200 persons, and features a terrazzo floor. In the rear of the hall is a large kitchen, and the boiler room. Adjacent to the banquet hall on the west side are the recreation rooms, which may be entered from the outside by a separate doorway. The first floor contains the main entrance from State Street. The foyer is two stories in height, and features a mosaic floor of Tennessee marble, Greek Doric stone columns, a marble stairway to a balcony with marble capped balustrade, and a coffered ceiling with chandelier. The small and large blue lodge rooms are the major spaces on the first floor, The small blue lodge room can accommodate up to 250 people and has limestone walls with Greek Doric pilasters and an inlaid cork floor. A pipe organ is at the western end of the room, while the furnishings have blue upholstery, and walnut consoles and rails. There are three ancillary rooms here: anteroom, reception room, and library. The large blue lodge room has a capacity of 450 people and features limestone walls with Ionic pilasters and an inlaid cork floor. There is also a pipe organ in this room, and the furnishings have taupe upholstery, and walnut consoles and rails. There are also three ancillary rooms here: anteroom, reception room, and trustees’ room. The first mezzanine floor has a room for the blue lodge secretaries, and is equipped with a fireproof vault for records.

“The second floor is devoted to the York Rite bodies, and contains two major spaces. The Commandery room features Italian limestone walls with Roman Doric pilasters and columns, and an inlaid cork. There is also a pipe organ here. The west side of the room has an arcade supported by columns, and crowned with a balcony. The room can accommodate upwards of 500 people.”

“The third floor is primarily occupied by the Auditorium. This is used for general purposes as well as for the working of the Scottish Rite degrees, and has a seating capacity of 1,500 including 300 in the balcony.”

The building was last used in 2007 by the Archdiocese of New England of the International Communion of the Holy Christian Orthodox Church. The building was put up for auction in 2012 and was sold to its mortgage holder.