Springfield Science Museum gets $200,000 from Commonwealth 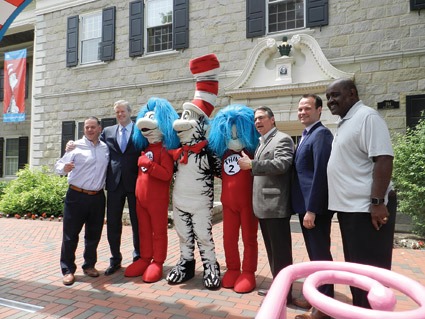 SPRINGFIELD – Gov. Charlie Baker said he saw the power of tourism during his tour of the Amazing World of Dr. Seuss Museum on June 9.

The governor, in town to make an announcement about $9.3 million in grants to cultural and tourism attractions, welcomed a group of visitors to the Seuss Museum.

He said with a laugh they gave him a blank stare when he told them he was the governor, but what they said made an impression on him: the family made the trip to Springfield from North Carolina.

The tourism industry in the Commonwealth was front and center on June 9 when Baker came to Springfield to formally announce $9.3 million in new capital funds from the Massachusetts Cultural Facilities Fund.

Baker made the announcement after touring MGM Springfield and viewing its progress and then the Amazing World of Dr. Seuss Museum at the Quadrangle.

The Springfield Museums will receive a grant of $200,000 that will be used for renovations to rest rooms, lighting and carpeting at the Science Museum.

Dave Stier, the director of the Science Museum, said, “We are overjoyed to receive these needed funds to help us improve the infrastructure of our 160 year-old museum.”

According to Anita Walker, the executive director of the Massachusetts Cultural Council, the Commonwealth welcomes 16 million visitors last year.

Baker noted the state’s investment so far of $110 million for these kinds of grants has resulted in a return of $2 billion in tourism revenues.  He called it “an extraordinary return.”

State Sen. Eric Lesser, Chairperson, Joint Committee on Economic Development and Emerging Technologies, said there is a ripple effect of every dollar spent in tourism. Lesser said he is looking for $100,000 in the next state budget in order to make the Seuss museum bilingual.

He said, “It’s going to be spectacular. The attention to detail and commitment to the history of the area and Springfield – there’s so many items and elements to this thing that are specifically geared toward reminding people this is in Springfield and its history. I think .people are going to be blown away by it.”

The < a href="https://www.liysf.org.uk/liysf/scientific-visits">Science Museum < /a>is a fantastic day out, however, due to COVID-19 the overall experience was a bit of a letdown. A lot of things in the museum are interactive such as tablets and a lot of these were off due to social distancing measures. Nevertheless, my family and I had a fantastic time and the space section was our favourite.