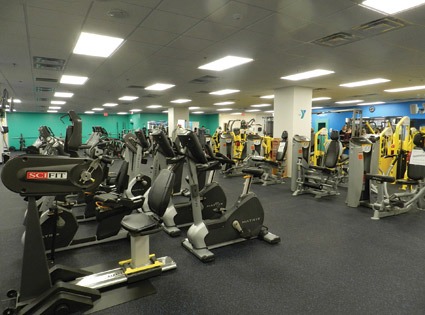 SPRINGFIELD – There is a new chapter in the almost 170-year-old history of the Springfield YMCA, with the opening of its new facilities at Tower Square.

YMCA President and CEO Dexter Johnson officiated the grand opening event on Dec. 5 and explained the move from the Chestnut Street building took more than a year to arrange.

The chair of the YMCA board, Jeff Poindexter, told a story about his family, about the necessity of moving his father from his large family home to a condo.

“I feel the same way about Chestnut Street,” he said.

The YMCA’s wellness center featuring a wide variety of fitness machines, free weights and a room for activities such as aerobics, is in a large area near the food court. The childcare center is on the first floor and the offices for the organization are in Tower Square as well. The wellness center has been open for a week and a half and the childcare center has been open for a month, Johnson said.

Johnson told Reminder Publishing there are still some afterschool programs at the old building and Home City Housing owns the residential units. The building is currently up for sale.

The move cost $600,000 and Johnson thanked a long list of corporate donors and banks that made the move financially possible.

Tower Square General Manager Fred Christensen said the YMCA’s move to Tower Square would be a great amenity for the people who work there and will create traffic for the shops and services there.

“They are a tenant everybody wants,” Christensen said.

There have been several new developments at Tower Square. The Tower Square Hotel is undergoing a major renovation to earn a Marriott franchise, while the White Lion Brewery and Taproom is being constructed.