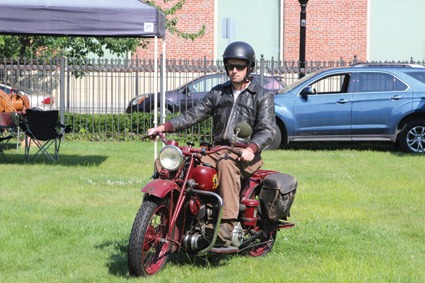 SPRINGFIELD – They came one by one driving into a large yard on the campus of the Springfield Museums – truly rolling history. The Eighth annual Indian Day hosted by the museums brought together more than 1,000 attendees and 62 vintage “motocycles.”

Indian was the first American brand of motorcycles – the company used the phrase “motocycles” to describe the vehicles – and was made n Springfield from 1901 to 1953.

For Steve Montagana of Agawam, who rode to the event on his unrestored 1941 Indian Scout military bike, the love affair with the Indian has been part of his life since childhood.

He said the fact they were made in Springfield and had such style very attractive to him.

“Every generation, the bikes had something different,” he said.

Montagana has had this bike for 25 years and said he hadn’t ridden it for 10 years, but “it did great.” He has other Indians as well.

Robin Gazza of Windham, CT. brought one of his seven Indians to the rally, a 1930 model with a sidecar he added.

“I like to play with my toys, “ he said with a smile. “I don’t know why I’m drawn to Indians.” He paused a moment and added with a laugh, “It’s a disease.”

For Mike Nichols of Palmer his 1941 Indian Scout has been a project and one that he has enjoyed. He has reworked the engine utilizing larger pistons – genuine Indian parts, he added – giving the bike more power. He noted the red paint on the bike is not original, as this was also a military bike, but he has no interest in restoring it. The new paint was probably added in the 1960s, he estimated and is part of the bike’s story.

He rides the bike frequently and enjoys it.

For Tim Baer of Monson, the Indian has played a prominent role in his entire life. His father, Butch, always rode Indians and Tim remembered, “Dad wouldn’t let us near a Harley Davidson.” Today he rides a 1929 Indian Scout and a Kawasaki.

He said that at age 90 his father, who used to operate Baer Motorcycles in Springfield, still is riding and had just purchased a new Indian.

“At that age most people are buying wheelchairs,” he said with a laugh.

Baer is the publisher of the Motorcyclist’s Post, a monthly magazine, but also has assembled and written many books on the Indian. He has an extensive collection of Indian memorabilia that has been featured in many of his books.

Tim noted part of the appeal of the Indian is there is “so much heritage.” He added the Indian is “holding its own” in interest. To see his selection of books go to http://motorcyclistspost.com.

Other vendors were selling Indian parts – some new, some original – as well as several Indians in need of restoration.

There was a competition as of Indian Day and the winners were:

The Lyman and Merrie Wood Museum of Springfield History has the collection of Indian bikes and other items that had been assembled by the Charles and Esta Manthos on permanent display.