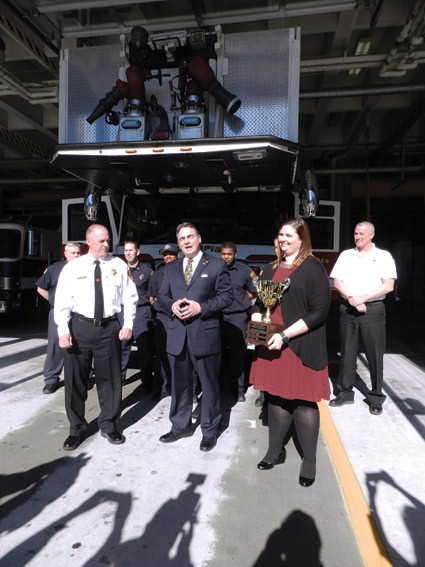 SPRINGFIELD – While for the second year in a row the Springfield Fire Department won the “Battle of the Badges Blood Drive,” it was local people who needed blood who were the real winners.

The drive for blood donation between the police and fire departments took place on Jan. 5. City employees who were donating blood that day could vote for donors from either department with the final count of 17 votes for the Fire Department and 16 votes for the Police Department.

Sarno contributed blood during the drive, but he didn’t reveal which department received his vote. He said, “I know first hand how important blood drives are.”
The final score, though, for the Red Cross was a contribution of 24 pints of whole blood and 6 units of power red cells were collected for a total of 30 units of blood.

Contant noted the Red Cross supports firefighters at fires and they are happy to support them in return.

He added, “Community service is a core mission of the fire service and there is no greater partner than the Red Cross in helping us provide those services when there is a disaster or emergency in the city of Springfield. Anytime we can help the Red Cross by giving blood or attending events, the department and I are honored to do so.”

Sarno credited Personnel Analyst Caitlyn Julius for organizing the event. She said the next blood drive in City Hall would be July 27.