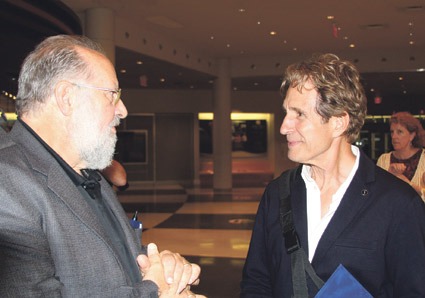 SPRINGFIELD – Actor, director and writer John Shea was celebrated as a hometown boy made good at a screening of his new film “Grey Lady” that benefitted three nonprofit organizations on June 29.

The presentation of the film he wrote and directed was at the Basketball Hall of Fame and drew an appreciative and capacity audience. Proceeds were donated to the Bing Arts Center, adult education programs at the Gray House and for the Community Foundation’s Dr. John V. Shea Scholarship Fund.

Shea had brought his first film, “Southie,” to Springfield for a screening in 1999.

This event was a homecoming with many people in the audience clearly family members and old friends. At a reception before the screening, Shea greeted many people warmly and posed for a number of selfies.

Keith Sikes, the marketing director of the Bing Arts Center and Cate Shea, John’s sister, organized the evening. Sikes recalled another of John’s sisters, the late Mary Sue Shea, with whom he went to high school and dedicated the evening to her.

Two of Shea’s longtime friends, Tom Foster and John Heaps, Jr., told stories of their time at Holy Cross School and Cathedral. Heaps said that he had visited the set of the film on Nantucket. “It was very impressive,” he added.

“What John has created is very special,” Heaps said.

Shea pointed out a number of people in the audience, among them Cathedral High School teacher Father Richard Riendeau who encouraged Shea to become involved with theater. Shea honored him by giving the character of a priest Riendeau’s name.

In a discussion after the film, Shea explained his mission in life is to tell stories and his goal with the film was to “make a thriller, but something more than a thriller.”

He described the process of making the film over a 10-year period. It took him two years to write the screenplay and when he thought the funding was in place to shoot the film, the 2008 recession wiped out that possibility.

Shea was asked to re-write the film so it could be shot in the Cayman Islands for funding purposes, a process that took eight months and then another six months to re-write and scout potential locations it so it could be filmed in Puerto Rico. Neither effort was successful.

Once he was able to secure funding, he shot the film on Nantucket where he lives. Post-production work, including editing and scoring the film, took another three years.

Finding a distributor took additional time for the independent production.

The film has many personal notes, Shea pointed out. Besides the reference to Riendeau and filming it where he lives, he used local talent he got to know as the director of the island’s theatrical company. He also named the lead female character after his wife and made the character an artist just as she is. The lead character, played by Eric Dane, meets his Melissa the same way Shea met his wife.

The film is now available through streaming and On Demand services as well as for rent at Red Box.