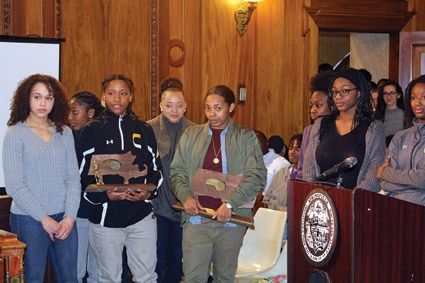 Members of the Central High School Girls basketball team are seen at the Springfield School Committee meeting at which the team was honored. Reminder Publications photo by G. Michael Dobbs

SPRINGFIELD – The Springfield School Committee made its meeting on March 23 an evening of recognition. The committee acknowledged and celebrated the accomplishments of both students and teachers.

Before the meeting, Mayor Domenic Sarno said in a written statement, “I’m so very proud of our Central High School – they’re really living up to their motto of ‘The Home of Scholars and Champions’ on and off the court/mat. Congratulations again to our Lady Golden Eagles, State Division I Basketball champs and State Sportsmanship award winners. Coach Erik Maurer and staff have done an outstanding job with our young ladies both on and off the court. I enjoyed being at the games (right here in our MassMutual Center, too) and cheering them on to victory! Congrats again to our Wrestling team – State Division I champs and State Coaches of the Year Darby McLaughlin and Andrew Ingham – they’ve had a continued tremendous run. And even though it was truly a heartbreaking loss in the State Semifinals, congrats to our Boys’ Basketball team, the Western Mass Division I Basketball champs and State Sportsmanship award winners, too. Coach Darryl Denson and staff have done a great job with our young men both on and on the court.”

Liberty Elementary School was recognized for rising from being a Level 3 school to a Level 2 school. Superintendent Daniel Warwick called the greater educational proficiency “great work by the staff.”

Principal Robin Bailey- Sanchez said the current staff has been together for five years and during that time there has been better communication, improved parent involvements and “honest self-reflection.”

The Springfield police who volunteer at the Liberty School Home Visit Project were also honored.

Bailey-Sanchez explained she had heard an idea to have the school’s resource officer accompany school staff members on their visit’s to student’s homes. When she mentioned it to Sgt. Tony Howard he “didn’t hesitate to participate.”

The officers – Charlie Youmans, Natalie Wilson, Raymond Gonzalez, Juan Hernandez and Samuel Gomez-Gonzalez –  all volunteer their time, as there was no funding in the budget to include them in the home visit program. Howard said the officers have been welcomed into the students’ homes.

Hall has been an educator for nearly 25 years and created the Bicycle Club at the school to teach kindergarten and first grade students how to safely ride a bike.

Hall said, “It’s a privilege for me to work under a principal who understands the importance of physical education.”

With the meeting running long, Warwick moved the report on the latest graduation and dropout rates to the next meeting. He said the Springfield district had “the best decrease in the dropout rate in the Commonwealth” and described the report as “another piece of great news.”