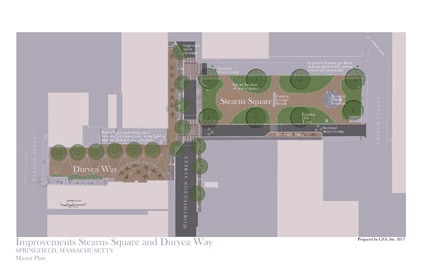 SPRINGFIELD – The concerts that have been part of the summer in Springfield at Stearns Square will not be presented this year due to the renovations planned for the park area.

Springfield Business Improvement District (BID) Executive Director Christopher Russell confirmed to Reminder Publications the concert season has been cancelled for the time being, as opposed to being moved to another downtown area.

The cruise night, though, which had been at Stearns Square, is being preserved and moved to Court Square for Monday night. The event will start May 15 and continue through the end of August he said.

While the concert series is gone for the time being, Russell said there would be music at White Lion Wednesday, which will return for a second season beginning May17 and Thunderbird Thursdays starting July 20.

The BID is also sponsoring two farmers markets downtown – one on Thursdays on Market Street and the other on Friday at the park opposite Tower Square.

He said there might be a music event in the works and the Valley Brew Fest may return as well.

The summer concerts, commonly known as “Bike Night,” attracted thousands of visitors to downtown Springfield. In 2015 the BID made the decision to prohibit parking on Worthington Street  where motorcycle riders commonly parked their bikes. The riders stopped coming and alternative music events were started to take advantage of the situation.

In 2016, parking on the street was partially restored but Worthington Street was not open to through traffic to prevent “cruising,” as Russell explained to Reminder Publications at that time.

Russell said the changes to Stearns Square should begin later in the summer. He had hoped they would have been started this spring.

According to information supplied by the mayor’s office, “The city will be making significant improvements to Stearns Square Park, Duryea Way, sidewalks in the area, and has plans for a new low-interest loan program to attract full-service restaurants.”

Russell said there should be three new restaurants in the Worthington Street area by the end of the calendar year.

According to the mayor’s office, the renovations include “new landscaping, trees, pavers, fountain restoration, and park furniture. This park is important to become a centerpiece to establishing a Stearns Square dining district, and important to get completed with the timing of new projects and new visitors to the city. Duryea Way will become a key gateway for transit passengers connecting the station into this district, and will be revamped with new landscaping and decorative gateway arches leading in and out of the district. The project is expected to go to bid late spring with work starting in September.”

Sarno said, “The renovation of Stearns Square and Duryea Way is an integral part of the renaissance of our downtown.  The proposed improvements along with significant investments at Union Station and MGM Springfield will market our downtown as a destination to residents and visitors from throughout the Pioneer Valley.”

The Parks Commission has not yet approved the plans.