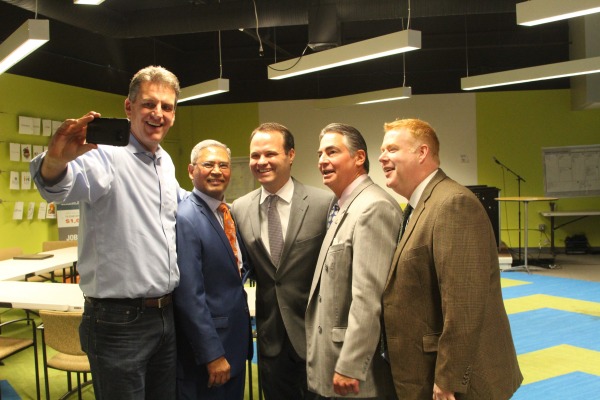 SPRINGFIELD – Secretary Jay Ash of Housing and Economic Development said the two $80,000 grants he brought to Western Massachusetts – one to Valley Ventures mentors (VVM) in Springfield and the other to the SPARK program in Holyoke – were designed to “help you attract new mentors and new start-ups.”

In an informal meeting between Ashe, Mayor Domenic Sarno, state Sens. Eric lesser and James Welch as well as state Reps. Angelo Puppolo and Jose Tosado with member of VVM staff and start-ups, Ashe said, “I talk about you all the time.”

Scott Foster, chair of the board for VVM, said the $80,00 grant would allow the organization to expand its mentorship program and export it to other organizations.

According to information supplied by the organization, VVM selects start-up businesses through a competitive process and “hosts a globally recognized Startup Accelerator Program consisting of four months of intensive boot camp weekends that prepare high-potential startups for scale and growth. In its fourth year, this cohort of 35 teams was selected from among hundreds of applicants from around the world. The startups were a diverse group representing 74 percent from Massachusetts and 69 percent of founders graduated from a Pioneer Valley higher education institution.”

This June 12 start-ups were awarded $150,000 in funding for their businesses.

Several VVM alumni businesses were on hand to explain to Ash how the program has helped them reach a new level in business success.

Natasha Clarke of Lioness Magazine explained how her on-line publication was aided by her involvement in VVM and became the first publication for the female entrepreneur.

Sheila Coon, whose Hot Oven Cookies mobile kitchen is a fixture at the Friday farmers market in downtown Springfield, explained her experience in VVM has helped her business advance. She is not about to launch a permanent retail location in the city and is preparing to be formally qualified as a minority and veteran-owned business that will enable to undertake opportunities with other businesses.

Kristin Leutz, the CEO of VVM, announced the program would be moving to its new offices in the city’s Innovation District next year.

Ashe said, “Nobody does innovation better than we do in Massachusetts and no one has more talent.”