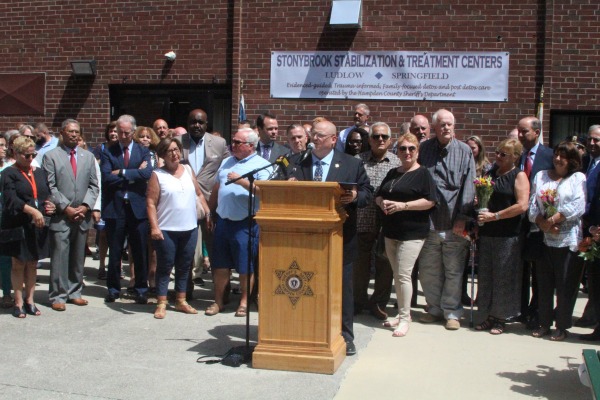 SPRINGFIELD – The event noting the first year anniversary of the Stonybrook Stabilization and Treatment Center (Section 35 program) on Aug. 5 featured both statistics and stories of success of the addiction treatment center.

Several speakers alluded to legal controversies that could remove the right of a person coming before a judge to ask to be committed to a treatment program for alcohol or drug addiction.

Springfield Mayor Domenic Sarno emphasized there is no controversy to him. He urged the many legislators present to “keep fighting for the funding.”

According to information supplied by the Hampden County Sheriff’s Department, the program has treated more than 860 people in the first year. The participants have come from all four western counties as well as Worcester County.

Although addiction treatment has been part of the Sheriff’s Department rehabilitation of inmates since 1985, the center on Mill Street also treats people who have committed themselves through the Section 35 process.

Under the administration of Sheriff Nick Cocchi, the Stonybrook facility includes much needed treatment beds for people who have not committed a crime.

Cocchi said, “It’s said it takes a village to raise a child. It takes a community to help an addict,

Congressman Richard Neal noted addiction is “a community issue” and that thanks to over-prescription, addiction to opioids is not just an issue with younger people, but to people 60 and 70 years of age.

Dr. Mark Keroack, CEO of Baystate Health called the Stonybrook “an innovative, efficient program the opioid crisis now demands.” He added the Stonybrook program has a lower rate of returns than the state average and is 45 days, which is longer than many other programs in the Commonwealth.

He also said that while “slight” decrease in overdose deaths across the state, Hampden County is struggling, especially with the use of Fentanyl.

One of the men who has gone through the program, identified just as “Keith,” recalled how he came to the conclusion while panhandling one day that he had to give up drugs.

He said he has been sober for a year. “This program helped save my life,” Keith added.

Noting the increased need for services, Keith said, “The more programs out there the better chance we have.”