Students still needed to train as dealers at MGM Springfield 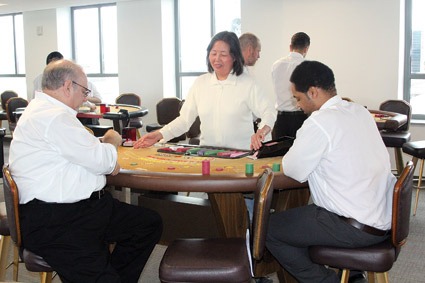 SPRINGFIELD – On the ninth floor of 95 State St. about 30 people dressed in black pants and  white shirts were learning the ins and outs of blackjack. Standing around actual gaming tables, these students were gathered in the hopes of doing well enough to earn an audition with MGM Springfield and hopefully a job offer.

MGM Springfield will have openings for 450 dealers with the bulk of those positions at full time. With the casino opening 24 hours a day there will be three shifts needed to be filled and there are still openings in the Massachusetts Casino Career Training Institute (MCCTI) operated jointly by Springfield Technical Community College and Holyoke Community College.

One of the instructors, Angel Rivera of Springfield, has been a veteran dealer for more than 25 years in casinos in New Jersey and Connecticut. He called being a dealer “a great career, but noted there is much to learn and many elements of the play a dealer must be aware from remembering which player has bet to maintaining the security of the game.

Rivera noted, “Learning how to deal is not like playing. Dealing is one thing, playing is another.” He added that it is “a lot easier” to teach someone who is not familiar with the game.

When this writer visited the school on March 5, the students were in first week of a six-week course and Rivera said, “Everyone is doing very good.”

One of the students Raymond Caporale of Springfield sees dealing as a second career after spending 42 years working for a telephone company. He admitted he wanted to work as a dealer as a young adult but didn’t follow through. He plays blackjack and said playing the game and being the dealer is as “different as night and day.”

Around the large classroom there are poker, roulette, baccarat tables set up for classes as well as those for novelty games such as “chasing the flush,” three card poker, crisscross poker and four card poker.

During a break – the school day is eight hours with breaks – the students are still practicing what they have learned. Michel Cabral, the school’s director said students also come in on Saturdays to take time for extra practice.

Robert Westerfield, the casino’s vice president of table games, explained the school in Springfield is singular. He explained that in Atlantic City, NJ, for example, there are dealer schools that are standalone businesses. What MGM Springfield is doing is not “an industry standard.”

The advantage, he noted, is the students “don’t develop any bad habits, we teach them the right way.”

Although interest in being a dealer is growing, Westerfield said the capacity of the school has not yet been met.

“We’d like to have more [students], but we’re pleased to what we have,” he said.

Dealers hired through the program by MGM Springfield and complete one year of service will be eligible for a tuition reimbursement, something Westerfield said was not typical.

Upcoming information sessions will be conducted at the school l at 95 State Street on the following days:

For more about future classes and how to register for them, go to www.mccti.org.