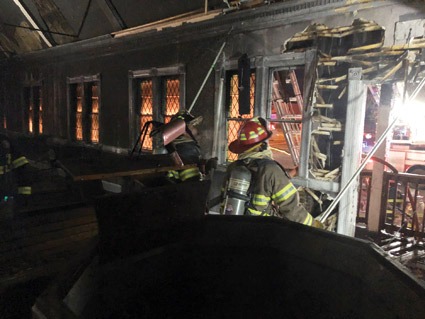 SPRINGFIELD – According to the Massachusetts Department of Fire Services, “Dushko Vulchev of Houlton, Maine, has been arrested and charged with several counts of malicious damage and three counts of attempted arson of the Martin Luther King Presbyterian Church at 14 Concord Ter. in Springfield. There was one attempt to burn the church on Dec. 13, and two on Dec, 15, 2020. He was arrested on Jan. 1, 2021 by Pittsfield Police and is being held on bail for arraignment Monday morning in Pittsfield District Court.”

The investigation into the fire that damaged the church on Dec. 28, 2020, is ongoing by the Springfield Arson and Bomb Squad and State Police assigned to the Office of the State Fire Marshal. The Federal Bureau of Investigations and the Bureau of Alcohol, Tobacco, Firearms and Explosives is also assisting in the investigation.

Firefighters responded to a call early Dec. 28 for a fire at the Martin Luther King Jr. Community Presbyterian Church. The church is now being deemed unusable by the Springfield Fire Department, due to damage.

“Terrible that somebody tried to burn down the Martin Luther King Church on Concord Terrace. It looks to be an arson type situation. We are reviewing cameras. Kudos to the fire department, the men got in there [and] were able to save some very, very valuable religious items in the church,” said Mayor Domenic Sarno during his COVID-19 press conference on Jan. 4.

The fire started around 5 a.m. on the morning of Dec. 28 and took hours to put out. According to Fire Department spokesman Capt. Drew Piemonte, significant damage was made to the interior of the hall and spread to the attic. The exterior of the building remained mostly undamaged with only some smoke damage at the rear of the building. Altogether, Piemonte estimated damages to the church to be over $100,000. No one was injured during the fire.

According to Jennifer Mieth, public information officer for the Massachusetts Department of Fire Services, this is the usual procedure for fires in houses of worship.

“Massachusetts uses the ‘team concept’ of fire investigation. Fires in houses of worship are taken very seriously because they have a great impact on the entire community,” said Mieth.

The Dec. 28 fire is not the first that has occurred in the vicinity of the church in recent weeks. According to Mieth, there were three other small rubbish fires in the past 10 days. Two fires took place on Dec. 15 and one on Dec. 13.

The previous fires were not considered suspicious and were quickly put out. The small rubbish fires were believed to be started accidentally by cigarettes, said  Avery. Due to the size of the Dec. 28 fire and the fact that it began at night, it is being considered highly suspicious. However, the investigation is ongoing.

“At this time, the fire is not being called intentionally-set because the investigation into the origin and cause is ongoing. All possible causes are being considered as they work to determine where the fire started and then how,” said Meith.

In his press briefing, Sarno praised Springfield firefighters and said he has reached out to the church to offer any help. The church had recently raised money to replace their roof.

“Shame on this person who did this. You will be caught and a message will be sent. They are going to hunt you down and they’re going to get you. And you’re going to face the full extent of prosecution,” said Sarno.

Sarno issued a press release that noted how the city has rallied behind the church. “As my administration did with working with Bishop Bryant Robinson of Macedonia Church of God in Christ, and all our local, state, federal and private partners back in November 2008, we will do again with Pastor Reverend Dr. Terrlyn Curry Avery of MLK church to not only catch and prosecute the culprit, but just as important, help them rebuild.

“Again, I’d like to thank Springfield Fire Department Commissioner BJ Calvi and his brave and dedicated firefighters, who did a tremendous job in saving the building and religious artifacts.  Having been on site to view the situation and in numerous contacts with Rev. Dr. Avery, I am happy to announce and not surprised of the heartwarming outreach and support I have received for our Martin Luther King Jr. Presbyterian Church – ‘Springfield will once again show it is a caring city.’  I’d like to thank Bishop William Byrne for his offer of space, Paul Beturne of Dimauro Carpet and Tile company for his offer of carpet and flooring, and Payton Shubrick of 6 Bricks for her assistance offer, too.”

Sarno concluded. “As I stated to Rev. Dr. Avery, even though this was a tragic event, ‘from these ashes a phoenix will rise again.’ Again to our most generous business and philanthropic Springfield community, if you can assist please contact my office at (413) 787-6100 and/or my Administrative Assistant Carolyn Jackson at cjackson@springfieldcityhall.com and my Chief of Staff Tom Ashe at tashe@springfieldcityhall.com.”

Avery released the following statement, “The leaders of the Martin Luther King, Jr. Community Presbyterian Church (MLK Church) and I have been informed that an individual has been arrested in connection with the burning of the church.  We understand that the investigation is ongoing.  We want to thank the local and federal law enforcement officials for their diligence in this investigation. I want to thank Mayor Sarno who is keeping me informed about the investigation and is in daily contact with me.  I also thank him for his promise to continue to assist the church with its rebuilding.  Although we have suffered a tremendous loss and certainly believe that whoever committed this atrocity should be held accountable for their actions, we also recognize that the person is clearly a wounded soul. As such, we offer forgiveness, along with our prayers for his spiritual, emotional, and psychological healing.

“I want to thank community leaders and my fellow faith leaders who have expressed their concern for, and support of, our members and about the impact that this burning has on a community that is already besieged. I thank everyone else who has offered prayers, kind words, and support to the members of MLK Church.  If you would like to make a donation to the rebuilding of MLK Church, please do so at psne.org/donate.”