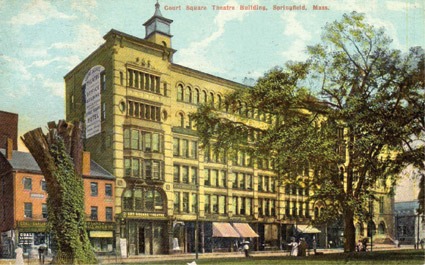 This vintage postcard shows the Elm Street building MGM is now planning to convert into apartments.

SPRINGFIELD – The discussed use of tax credits in the development of the 54 apartments MGM Springfield must construct as part of the Host Community Agreement may be prohibited under the gaming legislation.

Sarno stressed the inclusion of such units would be due to requirements imposed upon the developers if they use certain tax credits to help finance the projects. He was emphatic in describing the project as “market-rate.”

The mayor also stressed the use of 31 Elms St. was still in negotiations. The Springfield Redevelopment Authority owns the building and Peter’s Picknelly’s Opal Development is the preferred developer.

The issue of the affordable units was raised for the first time by MGM officials at the recent Casino oversight Committee meeting of the Springfield City Council.

Elaine Driscoll, spokesperson for the Massachusetts Gaming Commission, told Reminder Publications, “MGM’s plan for the residential units will need to come before the commission for approval.”

Casinos cannot receive tax increment financing or TIFs that many municipalities award businesses in order to attract them to a community and casinos cannot be designated as economic opportunity areas, either, according to the legislation.

If 31 Elms St. is determined to be the location for the apartments, an additional issue would be parking for tenants and visitors. The tenants at 31 Elms St., if that building is redeveloped, may be asked to use the casino’s parking garage.

According to the changes to the MGM casino plans approved by the Gaming Commission in 2015, “Following the Proponent’s review of the zoning regulations for the prospective site(s), [for the apartments] an appropriate parking supply will be supplied on each site or through formal arrangements for shared parking in adjacent surface lots. There is also sufficient parking supply on the MGM Springfield site to provide alternative arrangements for parking.”