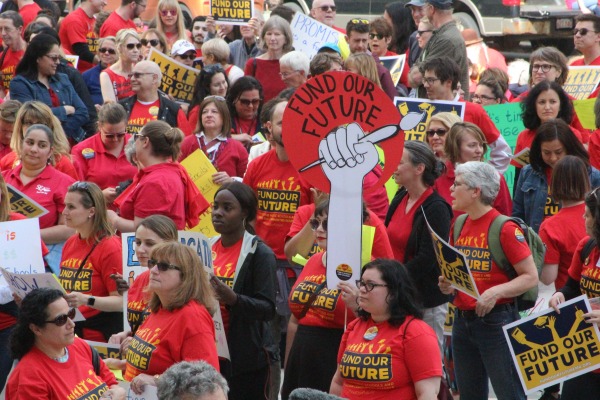 Hundreds of teachers from Springfield, Chicopee and Northampton rallied in Springfield to call attention to the problems of funding public education.
Reminder Publishing photo by G. Michael Dobbs

SPRINGFIELD – Hundreds of teachers and supporters from Springfield, Chicopee and Northampton, among other communities, crowded onto the steps of Springfield City Hall on May 16 to urge the Commonwealth’s legislators to pass additional funding for public schools.

Clad in red t-shirts and carrying signs, the audience listened to a succession of speakers detailing working conditions and budgeting obstacles teachers face.

Several legislators have told Reminder Publishing in recent interviews that a priority for them is to complete work on a bill that would establish “The Foundation Budget.”

State Sen. James Welch told Reminder Publishing in March, the Foundation Budget is “coming to a resolution.” Last year, the House and Senate couldn’t come to an agreement, he noted. “The issue, I think, is right on the top of everyone’s list this year,” he said.

Welch was among the elected officials who attended the rally.

Christopher Collins, vice chair of the Springfield School Committee, attended the rally and said, “ I completely agree with their message.” He added he believes the Legislature will get “part-way there” when it comes to crafting a final bill educators want.

Springfield teacher Suri Ramos spoke to her colleagues about the money she spends personally in order to help her students. “These are just some of my day-to-day operational costs. In late August, $200 for materials, again at the end of October. In November and December, $300 in sweets and souvenirs to provide my students a taste of culture.  January, $40 worth of water and snacks for a student that was constantly hungry because of a change in medication. February, another $100. March, $35 dollars of bus fair for students staying after school. April ,$52 for a monthly bus pass for a student who is the sole provider to be able to get from school to work; $600 dollars to provide for breakfast and lunch that my students would actually eat during a two day leadership training, because many of them would rather not eat than drink expired milk or the unhealthy food provided; $200 on paints and art supplies in order for my students to have a hands-on project opportunity in my classroom, even after strategically scheduling for the beginning of the month. The year is not over, prom is close by and graduation robes still need to be paid for in order to walk across the stage. These are my priorities, but this is also the reflection of the needs of our students.”

One teacher carried a sign that read, “Too many employees at Dollar Tree know my name.”

The Fund Our Future rally was urging passage of two bills, The Promise Act and the Cherish Act. The Promise Act “would implement the recommendations of the bipartisan Foundation Budget Review Commission and result in more than $1 billion in additional state funding for preK-12 schools in Massachusetts,” according to a statement released by the organization.  The Cherish Act “would implement the core recommendation of the state’s Higher Education Finance Commission and result in more than $500 million in additional state funding for public higher education in Massachusetts. The legislation would require in statute that the Commonwealth fund public higher education at no less than its FY01 per-student funding level, adjusted for inflation, and freeze tuition and fees for five years.”

A statement from Stephanie Marcotte, a professor at Holyoke Community College, read, “Students attending public colleges and universities in Massachusetts deserve proper funding. When we underfund these institutions, we aren’t giving our student their best chance as they transition into their career of choice or continue their education to receive an advanced degree. These public college and university students deserve an education that doesn’t leave them with huge amounts of debt. They deserve an education that allows them to focus on studying without working multiple jobs. They deserve an education that provides better opportunities for childcare, so parents can focus on their studies and feel confident that their children are cared for. Our students should never have to face food insecurity or homelessness! There are many things that our college students deserve. Without proper funding, our students struggle to survive when they could be flourishing and thriving.”