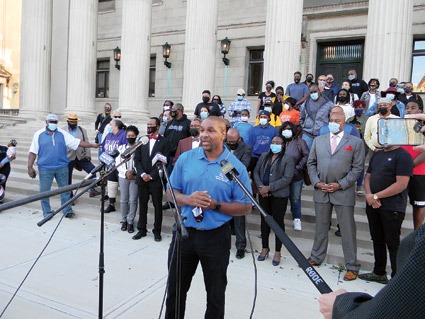 SPRINGFIELD – The termination of longtime mayoral aide Darryl Moss appears to be the incident that will launch a political movement in the city.

On Oct. 1, Moss, who had been the director of constituent services for Mayor Domenic Sarno, was terminated because of a social media post that shared a story from the Huffington Post about President Donald Trump’s support for Kyle Rittenhouse, the teenager who shot people during the protests in Kenosha, WI.

Moss then wrote, “This is equal to a declaration of war... but this is America! Sundown Sunrise [expletive] Country,” Moss wrote. He then added the phrase “Grab the rifles,” and tagged one of his friends, Keshawn Dodds.

As explained during a rally on Sept. 30 in support of Moss, “sunrise sundown” refers to the practice of many communities across the country that restricted people of color to their homes after sundown. The phrase “Grab the rifles” is a direct reference to episode three of the new television series “Lovecraft Country,” both of whom Moss and Dodds watch.

On Oct. 1, Mayor Domenic J. Sarno stated, “Any violation of our social media policy is taken very seriously and as I have stated on many occasions, there is zero tolerance with regards to any violation of this policy. The case involving my Constituent Services Director Darryl Moss has been treated in the same fair and consistent manner as with other similar social media violations. In turn and after proper legal review, I have dismissed Mr. Moss effective immediately.”

At the Sept. 30 rally, Dodds said his friend’s “words were taken out of context.”

He added, “[He] is a strong advocate for equal rights and unity … bold enough to call out the bigotry and the nonsense.”

Minister Johnnie Muhammad of Mosque 13 in Springfield called the investigation into Moss “a travesty.”

He asked the audience of more than 50 people, “What is the motive of going after this man when you should go after rogue police officers?”

City Councilor Tracye Whitfield, who reminded the supporters who worked in City Hall prior to her election to the council, said “It’s very difficult to be a black person in City Hall.”

Whitfield added, “Either the mayor cleans house or we will do it for him.”

Speaking for just a moment at the rally by urging people to vote, Moss has since used Facebook to discuss his intentions.

On Oct. 1, Moss posted, “To everyone who has reached out to support me – know that I am so so grateful. Folks have called, sent texts, emails, hit the inbox and more. Know that I am okay! My former employer didn’t create me or make me and being terminated won’t break me. Working for him was a job, not a platform… My body of work began before 2008 and continued to grow because of you – MY community!  I am a man who cares about this city. I was not born here, but my children were, my roots spread here, so I am not going anywhere. I WILL continue creating platforms and opportunities for us all to grow, to enhance the quality of all our lives. A job is a job – But that good work can be done for free. Thank you, ALL…Black, White, LatinX, Asian, etc.  Hold me to my word…I’m excited about the future. I hope you are too.”

He followed that up with a post on Oct. 2, saying, “Good Morning World... Let’s ReBuild! It’s time to be tactical, positive, optimistic, and open to building bridges that will enhance the quality of life for everyone in this city. Creating a plan will not happen overnight – neither will finding the answers to yesterday’s dilemma. This is when we follow through to work together to change the guard and make things happen! Enjoy your day and don’t allow anyone to force you to shrink to make them bigger. Go forward and be GIANTS!”

On Oct. 3, he wrote, “Time for a Unification Call. We’re stronger together! Definitely not about me. Let’s put forth our most viable candidate(s) and move forward together! - it’s about eradicating systemic racism and voting in the right people to completely clean house. They’re relying on us to do what we’ve done historically: forget and forgive way too quickly! If you’re with me... Unity is the word!!! If I’ve done something to offend you in the past... I apologize with all I got. If you offended me... all is forgiven... Let’s Build! And pull together.”

State Rep. Carlos Gonzalez issued a statement calling on Sarno and the Springfield City Council to “reconsider, review and repeal the Social Media policy and instate an updated Social Media standard that takes in consideration how social media is utilized today.”

Gonzalez added, “The firing of mayoral aide Daryl Moss for a so-called violation of the Social Media Policy was ill advised. The Social Media Policy implemented by Mayor Domenic Sarno has once again has caused community division and potentially ended careers for hard working, good citizens, and public servants of Springfield.

“Social Media has a direct impact in our daily lives, especially on our younger generation and Springfield policymakers need to get current on how social media is used and its infinite changes impacting today’s society. No social media policy should exist without categories of harm, severity and a process to determine intent. Anyone who is accused of violating the social media policy should be entitled to an independent review to assess if it was an unintentional mistake. Guidelines for discipline should include a behavior modification plan with a second chance before termination.

“Springfield’s Social Media Policy as written and implemented has proven to do more harm than good and has failed its original intended. I respectfully request the mayor and the city council to reconsider, review and repeal the Social Media Policy and instate an updated Social Media standard that takes in consideration how social media is utilized today.”

According to the city’s Social Media Policy, which was developed in 2017, city employees cannot post protected health information, confidential or proprietary information about a municipal department, explicit or obscene sexual images or content; unauthorized postings portrayed as being from the department; content that unlawfully harasses, threaten or discriminates against others; sensitive personal information about others, use of the city of Springfield or any other department logo and uniforms in images or video.