The MGM Springfield saga continues on 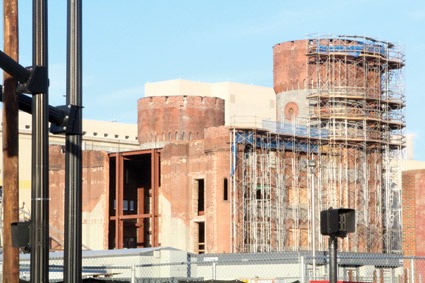 SPRINGFIELD — To say the MGM Springfield casino story continued to be a rollercoaster in the past week would be an understatement. Developments played out all through the week.

Early opening and visit from Hornbuckle

In the past week, MGM Resorts International President Bill Hornbuckle visited the city to reassure elected officials of the company’s continued committee and announced the casino would be opening about three weeks earlier than previously expected.

Mayor Domenic Sarno confirmed that on April 25 he met with Hornbuckle. A statement released by Sarno said, “MGM Resorts International President Bill Hornbuckle was in to see me yesterday to once again reassure me of their continued commitment to a first class resort in Springfield.”

Although Hornbuckle visited some media outlets, he did not have a press conference that was open to all media. The news of the early opening was made by sending a press release to some media after it had been made to others.

Reminder Publications was granted an interview to Alex Dixon, the general manager of MGM Springfield.

Dixon explained the earlier opening date was achieved through several factors including two mild winters as well as the completion of the Interstate 91 viaduct project. He added the company has been able to stick to its schedule of steps toward completion such as the installation of its slot machines in early April.

Now, he said the finish work comes into greater focus, “all of the fine detail for this unique facility.” This includes items such as hooks under the bars for women’s purses to crown moldings in the guest rooms, he added.

He expressed excitement at the “quality and volume” of candidates who have applied for jobs at MGM and urged people to consider the many job openings the company has.

Dixon said the casino is still looking to have a trained pool of applicants for the table games dealers and said these are “the jobs I would highlight the most.”

He added that he would “really encourage” people to consider taking the classes to qualify for those jobs.

Dixon said MGM has reserved a group of rooms at the Tower Square Hotel for the opening, which is part of the company’s efforts to work with other businesses in the city.

He said, “A big part of my job is to be a cheerleader for Springfield and the region,” and he wants to encourage “all of the great things happening in Springfield.

Approval from the Massachusetts Gaming Commission

Some of the commissioners expressed concerns about minors having access to the gaming area and were assured there would be security to prevent minors from playing the slot machines. Anyone under the age of 35 would have their ages confirmed if there were any question the commission was told.

According to transcripts of quarterly conference calls published by the investment website Seeking Alpha, both CEOs of Wynn Resorts and MGM Resorts International downplayed the idea of MGM buying the Wynn casino – since renamed to Encore – now under construction in Everett.

The Massachusetts Gaming Commission has undertaken an investigation whether or not Wynn should be allowed to continue to hold the license for the casino and has announced it will release a decision later this week.

The two conference calls were made the same week MGM announced it would open the Springfield casino on Aug. 24, about three weeks earlier than the dates that have been cited in the past.

On April 23, Matthew Maddox, CEO of Wynn Resorts answered a question about published reports about a possible sale to MGM.

“Sure. When we entered that market it was actually five years ago. We were excited about the prospect of that market, our location and the ability to generate some growth for the company. And five years later till today, we still like the Greater Boston area market. We think it is a really good opportunity. However, we are a $30 billion company, and if there was ever any risk due to heightened rhetoric, that there could be any contagion from Massachusetts into our $30 billion company in Las Vegas and Macau, we will have to take a hard look at what is best to protect our shareholders and our value.

“Still again, we love the market. We are going to continue to actively cooperate with the regulators there, and move forward. But at the same time, we will always be protecting our shareholders and our employees.”

Also downplaying a possible purchase was James Murren the CEO of MGM Resorts International in his conference call on April 26.

“Right. Well, of course, the answer I have to give is we don’ t comment on rumors, but I would again reinforce a couple things to be as helpful as I can. Number one, we’re opening up in Springfield in a couple months. I think people will be incredibly positively surprised on not only the execution of that resort and its returns. And we’ve committed to that city. We’ve been there for many years. We believe in it, and we think we’re going to make a lot of money there. And we think that the people of Springfield are going to be very happy.

“The other general point I would make is we have been very clear in terms of our free cash flow strategy, very clear. We embarked upon a couple very strong projects: Cotai, MGM National Harbor, and Springfield. Collectively that was a tremendous amount of capital expenditures that we have deployed, and we’re pleased that we did that. We think that grows the company going forward. But during that period of time, we have always mapped out the inflection point of free cash flow and why that is important to the owners of the company, many of which are on the phone, including many of which are in this room, including me.

“We are going to run this company for free cash flow, cash flow margin, and it would have to be an extraordinary opportunity to take a step back and start burdening this company with more construction in progress. I just don’t see it. I don’t think it’s likely. It would have to be an extremely unique situation. And as I said earlier, opportunistic and episodic but not daily course of business, like we believe the free cash flow story should play out as.”