‘The Spoils of War: Relics from the Front’ at the Armory 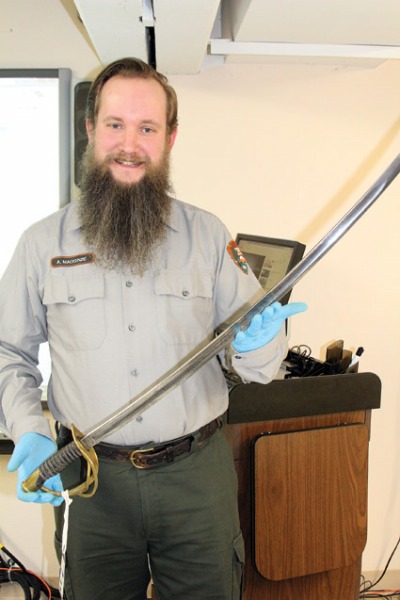 Springfield Armory Museum Curator Alex MacKenzie holds a Civil War sword made in Chicopee that somehow made its way to Germany. The artifact is part of a new exhibit, “The Spoils of War: Relics from the Front.”
Reminder Publications photo by G. Michael Dobbs

SPRINGFIELD – It takes two people to hoist a German machine gun that had once been mounted on a fighter biplane during WWI. It’s incomplete and battered, essentially in the same condition as American Army personnel at the close of the war found it. Why ship it to the Armory Museum in Springfield?

Curator Alex MacKenzie explained it was because of the system that allowed the machine gun to fire without shooting off the plane’s propellers.

“Army Ordnance was very interested in that,” he said.

The machine gun, along with many other artifacts, will be part of a new exhibit, “The Spoils of War: Relics from the Front,” that will open March 8 from 6 to 8 p.m. with a special reception.

Following the Armistice ending WWI, American Army Ordnance specialists combed through German weapons depots and dumps to find foreign weapons that could add to the technological understanding of armaments.

Many of those weapons, along with other artifacts, were catalogued and sent back to the Springfield Armory Museum, then a technology library for gun designers. The Armory received 200 of the artifacts.

“The Armory’s museum, already 50 years old by World War I, was a renowned technical collection of military small arms. The variety of artifacts found in Europe were not necessarily gathered as war trophies or curios, but rather as current or historical pieces that were intriguing to the engineers, machinists, and designers who used the museum as a resource for their normal day-to-day work making rifles at Springfield Armory,” MacKenzie said.

MacKenzie presented a preview of the exhibit on March 3 as part of his on-going “Curator’s Corner” lectures.

Archival Signal Corps footage from Paris, France, following the end of the war showed how hundreds of artillery pieces, tanks and aircraft from the war were on display in Paris. The footage also showed Army Ordinance personnel gathering weapons they believed would be of interest to the technicians in Springfield.

MacKenzie noted some of the items presented interesting questions to modern-day historians. He held a beautifully preserved officer’s sword and said it was made in Chicopee by Ames Manufacturing during the Civil War for the Union Army. What it was doing in Germany in 1918 was a mystery.

“How the heck did this thing get over there?” MacKenzie asked his audience.

Three weapons presented a sidebar to the history of America’s involvement in the conflict. MacKenzie showed three rifles, one made for British troops, while the other two were for French and Russian forces. American companies, Remington and Winchester, made each with at least two of them manufactured in Connecticut. The artifacts spoke to how American companies built arms for nation deemed friendly to U.S. interest before this nation sent troops to Europe.

Why Allied weapons were found in German facilities was at least partly explained by the fact that captured guns were given to secondary troops, MacKenzie explained. He showed how the wooden stocks were marked with a stamped noting they came from a German ordinance dump.

Another mystery was a circa 1881 trap door rifle that was considered obsolete in 1890 found in Germany. MacKenzie theorized the rifle may be have been used for bayonet practice.

Troops improvised and modified weapons in the field and MacKenzie exhibited an anti-aircraft gun made from a Marlon machine gun.

“It’s a kind of Frankenstein,” MacKenzie said with a smile.

Another modified weapon was a stripped-down Russian rifle that would have been used by a Russian airplane pilot if his machine gun were inoperable. MacKenzie said the pilot needed something to defend himself.