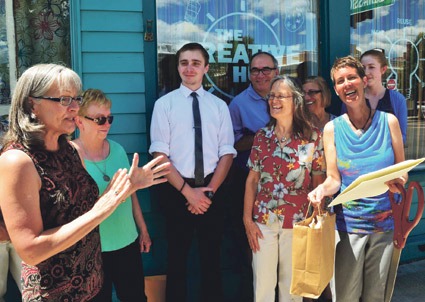 WESTFIELD – Art and Yankee thrift blend together at the Creative Hub and Beanetown and Co., a maker space for artists and craftspeople. The store, located at 28 N. Elm St., conducted an official grand opening last week.

Stacie Phetteplace, who also owns the adjacent Whip City Candles, said her latest venture is an interactive space and creative reuse center. The Creative Hub’s goal is to keep materials out of landfills and reused for art and crafts projects while teaching others about recycling, especially for younger members.

The store charges $5 for 90 minutes for access to a maker space and materials. “They can have it and have a blast,” she said. The Creative Hub will also be offering workshops, classes and “tons of fun.”

Since the candle shop opened several years back, she accumulated a vast collection of materials and other objects, which went used. She decided to build a space for crafters to come, create and use the stockpile of materials, which include fabrics, old license plates, and clock parts.

A member of Westfield on Weekends (WOW), she said the organization’s goal remains to build a strong community of artists. She added the Creative Hub is a “perfect fit” and in keeping with WOW’s mission.

Phetteplace, who opened the candle store 16 years ago, said the city’s arts community continues to grow and influence the Downtown’s revitalization. “Between WOW and the artist in the community, they really want out space down here to really take off,” she said.

Recent restaurant openings anchor the downtown, said Phetteplace, which acts as catalysts for businesses like hers to open. “Now we have people who are walking around,” she said. “If we can find a way to keep them here for a few hours, then it’s great.”

She added, “It’s more of mindset. The more people who come down here will realize they don’t have to go to Northampton or far away.” Customers often remark that her store would be something found in Northampton.

Her store’s reuse and recycle philosophy aligns with a growing movement, which is prevalent on Pinterest, she said. With cuts in the arts and in playtime at schools, she hopes the Creative Hub  will be a welcomed alternative.

If necessary, Phetteplace has space to grow her business in the coming months.

Kate Phelon, executive director of the Greater Westfield Chamber of Commerce, donated fabrics and other items to the shop. She said the arts is an “integral” part of the Downtown’s revitalization. “We are absolutely enthralled that more creatives are opening up businesses,” she said.