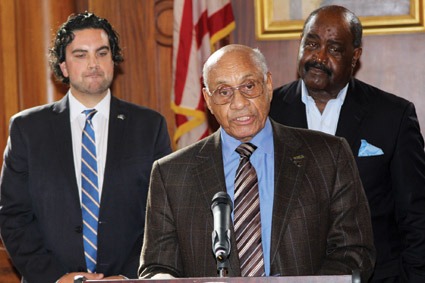 SPRINGFIELD – Commenting on how great he looked for his age, Mayor Domenic Sarno turned to 82-year-old Willie O’Ree and suggested he could help the Springfield Thunderbirds with their power play.

With what he accomplished in his hockey life, no one would have been surprised if he decided to lace up some skates.

O’Ree was honored at City Hall with Sarno declaring Nov. 3 Willie O’Ree Day and a citation from the Massachusetts House of Representatives.

O’Ree was later present at the MassMutual Center for a celebration of his achievements at the Thunderbirds’ 5-3 win over the Hartford Wolf Pack that evening. The win marked just the second of the season for the Thunderbirds and beforehand, O’Ree jokingly noted he’s “usually a good charm” when he’s invited to a game.

Sarno called O’Ree a “tremendous trailblazer” and “the Jackie Robinson of hockey” and noted, “It’s always appropriate that we should honor those who took a courageous stance with all the odds stacked against them and opening up doors.”

Thunderbirds President Nate Costa added, “Today is a very special day for the organization to put a spotlight on a great career and a great accomplishment.”

The Thunderbirds’ festivities honoring O’Ree were part of the team’s “Hockey is For Everyone” Night, which Costa said was a theme promoted regularly by the organization and professional hockey as a whole.

After playing for four years in Canada, O’Ree became the first black player to skate in an AHL game 60 years ago on Oct. 12, 1957 with the Springfield Indians. He later was summoned by the Boston Bruins and played his first NHL game Jan. 18, 1958. He returned to the Bruins for the 1960-61 season, scoring four goals and registering 10 assists in 43 games.

All told, O’Ree had 25 goals and 38 assists in the AHL and NHL along with 328 goals and 311 assists during a long career in the Western Hockey League. His career spanned 21 years.

O’Ree’s career almost wasn’t at all when he lost sight in his right eye after being struck with a puck while skating with the Kitchener Canucks in the Ontario Hockey League, a Canadian junior league. The surgeon told the then 19-year-old O’Ree he would never play hockey again.

Despite struggling to adjust while playing left wing as a left-handed shooter who couldn’t see out of his right eye, O’Ree was undeterred and continued to skate.

He joined the Quebec Aces, not disclosing his eye injury to the team, and helped them win a championship.

When he took the ice for the Boston Bruins for the first time, he said he didn’t want or expect any special attention or treatment.

“For me, I was just a skater who happened to be black,” he said. “Hockey to me was one of the things I wanted to play very, very much.”

When he retired, he wanted to remain in hockey in some capacity, but more so, he wanted to help make a difference in young people’s lives. Now he’s the director of youth development for the NHL’s diversity task force, first coming on board in 1996.

He travels to Boys and Girls Clubs, juvenile detention facilities, YMCAs and YWCAs and schools across the country spreading not only his love of hockey, but a story of inspiration young people can apply in whatever direction their life goes.

“My dad said, ‘Willie, find a job you love and you’ll never work a day in your life,’ and there’s a lot of truth to that,” O’Ree said.

Setting goals and working hard are the pillars of his message, he said, noting there is no substitute for those. As part of his visit to Springfield, he also met with students at the Renaissance School, sharing that message with them.

“What a fabulous message to our kids about what they can do if they work hard, do well in school and persevere,” Superintendent Daniel Warwick said.