Today’s veterans should learn about benefits they have earned 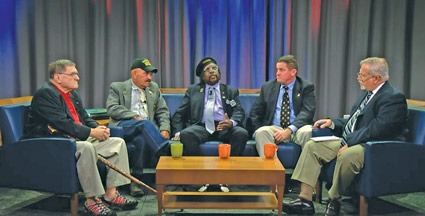 SPRINGFIELD – Four area veterans from two different era agree on many things, but one point is perhaps the most important to all of them: veterans and their families need to understand the services and benefits that come with service to your country.

McCluskey, Gomez and Daniel Walsh are all veterans of the Vietnam War.

Bennett Walsh is a post-9/11 vet. Bennett Walsh, who is now the superintendent of the Holyoke Soldier’s Home, explained today’s vets receive more information. Walsh said with his generation military personnel must receive a physical exam and sign up for benefits through the Veteran’s Administration (VA) before they leave the service.

He described it as a “culture change,” although some Post 9/11 vets are still very wary of the VA. The transition of leaving the military takes several months.

His father, Daniel Walsh, said some veterans of the Vietnam generation didn’t listen or learn about the benefits they had earned.

Gomez said many veterans fail to educate their families about benefits that could help them after their passing.

Bennett Walsh said there is a new insurance policy program that requires both the veteran and his or her significant other to decline it. This way the family of the veteran is involved in making the decision.

He added the phrase “it’s okay not to be okay” is gaining in use since being introduced in 2003. “If you’re not feeling well, that’s normal because everyone in warfare experiences PTS [Post Traumatic Stress] in some different kind of way. And that’s all right. That’s nothing to be ashamed about.”

Bennett said he and others no longer uses the phrase Post Traumatic Stress Disorder because the condition is not an illness, “it’s an injury.”

McCluskey recalled when he visited the VA offices for the first time, the staff “blew me off,” which motivated him and others to create veterans’ center that could have veterans helping veterans.

McCluskey recalled that people who served in World War II told him Vietnam War veterans weren’t really vets and blocked him and others from joining established veterans’ groups.

While today many people, when meeting a veteran or an active duty member of the military, will say “thank you for your service,” that was not the case for the Vietnam War, members of the panel said.

In speaking about the changing population of the Holyoke Soldiers Home from WWII and Korean vets to Vietnam and Post 9/11 vets, Bennett Walsh said, “the needs will always outweigh the capacity.”

The facility in Holyoke is the 10th largest such center in the nation, he noted. To truly fulfill the need the center would need another 100 to 150 beds and “that’s hard to do.” An expansion would need additional space and staff.

McCluskey said if vets don’t seek out the benefits they’ve earned, “They’ll [the government] do away with them if you don’t use them.”

Daniel Walsh recalled when he left the Marines, he didn’t think about anything other than his future in the private sector. At an accidental meeting with a VA official at lunch, he was told at age 26 he should come to see them. Walsh rejected the invitation.

The official told him, “Come and see us because you’re going to want us when you’re 65 or older.” Walsh added he had head nothing about benefits and services when he left the service and the official’s advice proved to be true.

“If I had these 9/11 guys in here now [I’d tell them] take every advantage that you have of all of these wonderful things the military gives you,” Daniel Walsh said.

Veterans can turn to the following organizations for advice and assistance:

To watch the full show, go to https://www.youtube.com/watch?v=5vLKEG_fvEg&feature=youtu.be&fbclid=IwAR3t1ukzQQMnaW5q-8MTUhL2oVmZl4KCZt28XFFUMDSUw5mqpXA7DXSFb9E.