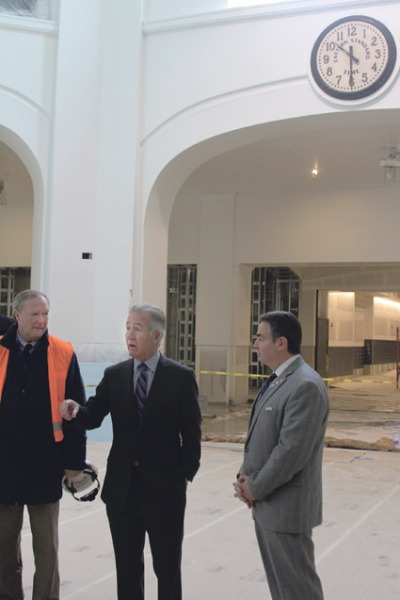 SPRINGFIELD – Another step forward in the ongoing renovation of Union Station was unveiled on Dec. 13 with the original clock in the concourse restored and re-installed.

Kevin Kennedy, the city’s chief development officers, noted the 54” in diameter clock was restored by Electric Time Co. of Medfield. The original bronze hands and marble face were used. The clock will be covered in plastic to avoid dust as the rest of the work is finished.

Kennedy also noted the certificate of occupancy will be issued in several weeks. Following that event, the Springfield Redevelopment Authority, which owns the station and has over-seen its renovation, will announce the retail, office and transportation tenants and start the build-out of those spaces.

The Pioneer Valley Transit Authority will begin training their drivers for the new terminal, Kennedy added.

Kennedy called the leasing and the build-out of commercial space in the building as “equally challenging” as restoring the building.

He predicted the full potential of the building as a regional transportation hub will be seem in 2018 when the commuter trains operated by the state of Connecticut will be running 12 trips a day into the terminal, linking Springfield with Hartford and New Haven, CT.

Mayor Domenic Sarno praised Congressman Richard Neal for his tenacity for acquiring and maintaining funds to make the renovation a reality.

“The congressman never took his eye off of [the project],” Sarno said.

Neal noted the station, which was opened in 1926, is 90 years old this month, but has spent 43 years of its life as vacant. He used the station as the location for his announcement he would run for City Council 40 years ago and promised that he would work on making the structure useful again.

Neal called the project, “a healthy investment of federal dollars” and thanked former Sens. John Kerry and Edward Kennedy for helping him to preserve the federal earmarks for funding.

Kennedy added there would be a “large event” on Jan. 9 to walk through the building.