Regional transportation center at Union Station is a year away

Could not find template: Explorer/default-display 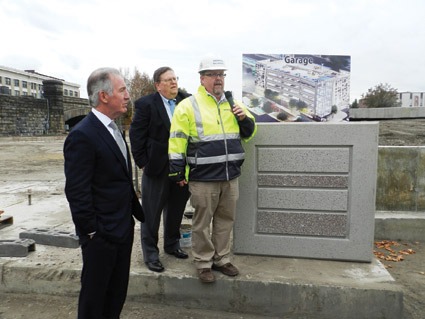 SPRINGFIELD – With just more than a year until its reopening in December 2016 as a transportation intermodal center, the Union Station renovation is on time.

The new terminal complex will be the location for Amtrak, local bus, and intercity bus and taxi services.

Lanneville led the party over freshly laid asphalt and explained new utilities lines had been installed causing Frank B. Murray Street to be repaved. He also noted how the new connecting street between Frank B. Murray and Liberty streets had been paved.

Standing on the site of the parking garage – near Main Street where the Hotel Charles used to stand – Lanneville said that within the next two to three weeks the crane would arrive that will erect the street and precast concrete garage.

He noted the backlighting on the finished structure will be “pretty amazing and make quite a statement for Main Street.”

The garage will take about two months to be fully erected, he added.

Lanneville pointed out the wall that is in the rear of the property that supports the tracks. He said there are 200 35-foot “soil nails” holding the wall up. The former baggage building itself had supported the wall and the tracks.

The area between the garage and the terminal building will be the bus area with room for 17 Pioneer Valley Transit Authority busses as well as intercity buses.

At the terminal building, a team of workers was washing and repairing the brick, while others were inside. The grand concourse area has been stripped down to its bare concrete, brick and steel.

Lanneville noted the original terrazzo floor is in “great shape” and is protected by a layer of wood. It will be refinished, he added.

The huge steel rail used to support the ceiling in the tunnel that links the concourse with Lyman Street have been restored, Lanneville said.

Springfield Redevelopment Authority Executive Director Chris Moskal pointed out to Reminder Publications the workers who are starting the process to address water leaks in the tunnel area from the tracks. Workers were busy removing the structure that is the top of one of the stairs in the tunnel that leads to the tracks above. Moskal said some of the leaks are coming from that area.

In March 2016, the CSX and Amtrak tracks will be systemically removed, the soil and gravel on which they rest will be dug out and a waterproof layer will be installed, he explained. The Commonwealth is allocating $4.8 million for just that operation.

A temporary rail track will be installed to keep the line in service and Moskal said the process would take three to four months.

The windows for the terminal will start being delivered Dec. 1, and Moskal said the sill and lintel repairs have been completed. Windows that have been covered in plastics will have the plastic removed and the new windows installed.

He also noted the vintage clock from the grand concourse is being restored and will be hung in its original position. Barber chairs that were still in the terminal are also being reconditioned.

Springfield Chief Development Officer Kevin Kennedy noted the Union Station project started in 1988 when Neal was mayor and will be finished four mayors later with Sarno. In that time, there have been seven governors in the state.

Neal noted that completing the renovation and reuse of the building had been a dream of his since 1977 when he announced his first run for office – for the Springfield City Council – at a reception conducted in the building, which at that time had been closed for four years.

Neal thanked the late Sen. Ted Kennedy and former senator, now Secretary of State, John Kerry for helping to secure federal funds and keeping those funds viable until the project could be started.

Fire Commissioner Joseph Contant announced a piece of the steel frame of the World Trade Center destroyed on Sept. 11, 2001 will be on permanent display at the re-opened terminal.