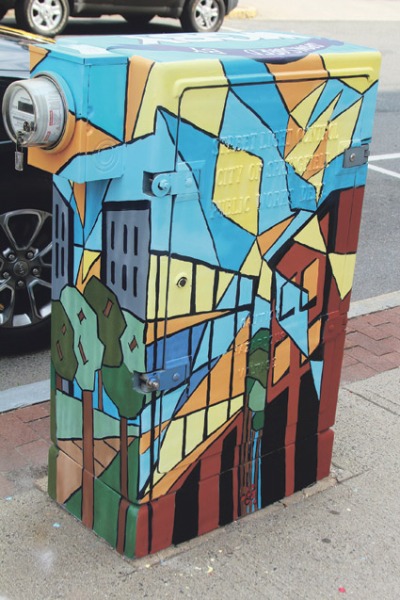 Among the 19 utility boxes now transformed into murals are Arielle Jessop’s at the corner of Dwight and Taylor streets.
Reminder Publications photo by G. Michael Dobbs

SPRINGFIELD – What were once ubiquitous but unnoticed elements of modern urban life are now works of art in one part of the city.

On June 23, the Springfield Central Cultural District celebrated the completion of 19 murals on utility boxes downtown. They range from a portrait of the late Muhammad Ali to Court Square to flowers to basketball playing cats.

Morgan Drewniany, executive director of the Cultural District, explained the project cost $5,000, which was provided by sponsors. Each utility box mural had a budget of $300 with $275 going to the artist with the other $25 paying for the necessary permitting. She explained the Department of Public Works had to approve of the project.

The project allowed a variety of artists to participate in a public arts presentation. Renee Flowers of Springfield painted the box at the corner of Dwight and Bridge streets. It shows people of different ethnic groups standing together.

“It’s about the revitalization of Springfield,” she said. “It takes all of us to come together. We’re all one.”

Artist Chris Gann of Enfield, CT, had done murals before but his painting – a face that is composed of smaller faces – reflects a series of paining that he has been doing since 2009. His utility box is at the corner of State and Chestnut streets.

He said the public nature of the artwork “made me feel confident about my work.”

Gina Beavers said, “Painting in the elements is quite a challenge.” She cited the heat, wind and dust as things an artist “had to endure.”

What was a pleasure for her was meeting and speaking to people as she painted.

For her mural, at the corner of Chestnut and Mattoon streets, she was inspired by the cherry trees and their blossoms at the intersection of Mattoon and Eliot streets.

She said her painting took seven hours to complete.

Drewniany said she would like to see the project extend to the other neighborhoods of the city beyond the cultural district and said there has been talk to bring it to Forest Park.

Part of the inspiration behind the project was to engage people within the district with the arts by bringing the arts to them.

“We want to break down barriers,” she added.

Mayor Domenic Sarno said that when comes to improving the city “little things means a lot.”

For a map of the boxes, go to http://springfieldculture.org/utility-box-murals.