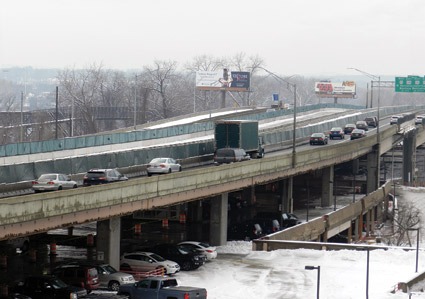 The curtains designed to decrease the impact of the demolition noise have been put in place on the Interstate 91 viaduct.
Reminder Publications photo by G. Michael Dobbs

The Massachusetts Department of Transportation (MassDOT) released a statement on Feb. 9 that demolition work slated to begin on the viaduct on Feb. 10 has been delayed because of the weather.

What is coming down is the concrete bridge deck of the inner northbound lane of the highway. There work will be undertaken from 7 a.m. through midnight in two shifts and the demolition is expected to continue through April of 2017.

MassDOT announced the contractors would be using “noise mitigation techniques” during this period. They have installed noise curtains in the work zone and will install additional curtains if noise levels demand it. Trucks that will be involved will have “self-adjusting back-up alarms, which limit the sound to a set volume above the ambient (background) noise.”

The statement added the contractors have “has taken initial readings of ambient noise in the work zone to establish a baseline for comparison.”

Eric Martinez of MassDOT told Reminder Publications that despite the announced delay, “The project is moving along on schedule. For the most part this has not been a severe winter. Even when there has been precipitation some aspects of construction have continued.  For example, during the most recent storm Sunday night into Monday, work continued which was not weather-dependent.”

He said of any unforeseen problems, “No major issues at this time to report. The public is encouraged to visit the project page on our website to see the progress of the construction.”

Tina D’Agostino, president of CityStage and Symphony Hall told Reminder Publications she and her staff have not yet heard any complaints about the change in traffic patterns from audience members.

“I think people are finding other ways to get here if their routes are affected,” she said.

Noting her staff has experienced some traffic back-ups when leaving work between 4:30 and 5 p.m. D’Agostino has initiated a flextime schedule for them.

What has helped, she believes, is the communication between MassDOT, the Springfield Regional Chamber and its members about changes in the project.

The real proof the I-91 project hasn’t hurt the organization is the fact events in last two months have been well attended, she noted.

Jeffrey Ciuffreda, president of the Springfield Regional Chamber, said that in meetings he regularly has with chamber members he always solicits opinions about the project and he has heard no complaints so far.

He believes that people traveling though the corridor have apparently experimented and found routes that work for them while avoiding the highway. He counts himself among this group.

Ciuffreda added he has heard from businesses along the highway that the changes in the highway haven’t affected them. He said officials at the Basketball Hall of Fame told him attendance to the hoop shrine has remained steady, for instance.

“They have not found it to be a deterrent,” he said.