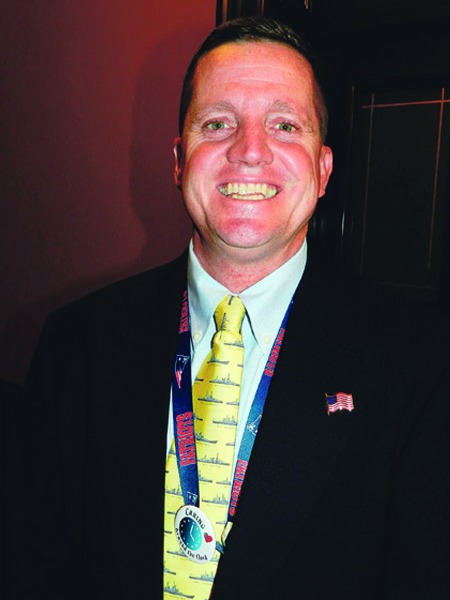 SPRINGFIELD – According to information supplied by Bennett Walsh’s attorney, March 27 was the day when his request for medical assistance to address the outbreak of COVID-19 was turned down by state officials.

Walsh, the former superintendent of the Holyoke Soldiers Home, continued to speak out last week about the events at the Home leading up to the devastating spread of COVID-19 with a press conference at which his uncle and his attorney, William Bennett, released documents showing a timeline of Walsh’s responses to the crisis.

Bennett, former Hampden County district attorney, supplied Reminder Publishing with the documents, as well as a statement about his nephew’s service as a Marine and his concern for his fellow veterans.

Walsh was placed on paid administrative leave in late March. He was removed and a new team to stabilize the health situation was brought in. Bennett charges that was because Walsh spoke about the outbreak, without consent from state officials, to Mayor Alex Morse of Holyoke and the press.

There have been several investigations launched including one from Gov. Charlie Baker, while another from Attorney General Maura Healey. Another is expected to involve members of the Massachusetts House. None of them have concluded as of this writing.

In early April, Walsh addressed accusations that had been made about him in a written statement, “There have been widespread reports in the media that state officials were kept in the dark about what was happening at the Soldiers Home during the Covid- 19 crisis. These reports are false. We provided updates on a daily basis, sometimes multiple times a day. These updates were by phone, text, email, conference calls and official report forms. These updates were made at various times to the staffs of the Secretary of Veteran Services (DVS), the Executive office of Health and Human Services (EOHH) and the Department of Public Health (DPH).”

More than 70 residents of the home have died from COVID-19.

The following is the timeline of events as described by Bennett that Walsh took in response to the discovery of the illness.

•March 21: Walsh “was notified that a veteran had tested positive for COVID-19. Later that night he notified the Secretary of Veterans Services and the next day he filed a critical incident report with both the Department of Veteran Services (DVS) and the Executive Office of Health and Human Services (EHS). Both the Department of Public Health and the Holyoke Board of Health were also notified. In that same critical incident report Walsh also notified state officials that five other veterans were symptomatic and that their samples have been obtained and sent for testing.”

• March 25: “Walsh was notified that a staff member had tested positive for COVID-19. He notified DVS and filed a Critical Incident Report with both DVS and EHS. Later that same day a veteran suspected of having COVID-19 died. State officials were notified orally of the death and that a sample had been collected and sent for testing.”

On this date, the Associate Commissioner of the Department of Public Health wrote Secretary Francisco Urena of the DVS, “I just heard from our DPH staff that they completed the call with staff at the Soldier’s Home. From their perspective, it sounds like Holyoke’s staff are doing everything they can and consistent with DPH recommendations. DPH will send supporting guidance documents and maintaining regular contact around cases, staffing and PPE levels.”

•March 27 is a key day in this timeline. Walsh learned that out of 10 residents tested, seven were positive. Walsh texted the results to DVS. It was also on this day, Walsh made a formal request to the Secretary of Veterans Services for medical assistance from the National Guard.

In his email sent at 1:24 p.m. he wrote, “We would like to formally request National Guard assistance (medical personnel-wise) to assist in our staffing for this pandemic.”

Secretary Francisco Urena wrote back about 20 minutes later, “We are exploring all options at this time.”

By March 27, 25 percent of the workforce at the Home were not reporting for work.

On March 28, Walsh was instructed not to answer questions about the outbreak from a local TV station. Bennett said that Walsh as the superintendent was not allowed to speak publically or with the press without prior approval of the comments from DVS.

When he spoke at a donation of a check to the home in 2019, a letter of reprimand was placed in his file, Bennett noted.

On March 29,  Walsh received a call from Mayor Alex Morse of Holyoke. Walsh spoke to the mayor about the situation without prior approval. Morse subsequently did a Facebook Live post on March 31 speaking about the conversation.

Bennett wrote, “Throughout his tenure as superintendent, his actions were always motivated by concern for the veterans and their families. For anyone to suggest that he has covered up, concealed or try to hide a public health crisis affecting the veterans he was committed to serve is a slander on his good name. Today his thoughts and prayers continue to be with the veterans whose lives have been lost and their families.”

A Executive Office of Health and Human Services spokesperson responded with the following statement, “The Baker-Polito administration is committed to serving its veteran residents of the Holyoke Soldiers’ Home safely, and along with the Legislature has increased their budget by 14 percent since 2015. It is imperative that the Soldiers’ Home in Holyoke provide a safe environment for the veteran residents, and the dedicated staff who serve them.  The tragic situation at the Holyoke Soldiers’ Home is a reminder of the insidious nature of COVID-19, a virus that is having a devastating impact in our communities and long term care facilities. We are deeply saddened by the extent of the outbreak and the loss of life. The circumstances that led to the heartbreaking situation at Holyoke Soldiers Home – including management and oversight – are the subject of a full and impartial investigation ordered by the Governor, led by Attorney Mark Pearlstein.”

"When he spoke at a donation of a check to the home in 2019, a letter of reprimand was placed in his file, Bennett noted."