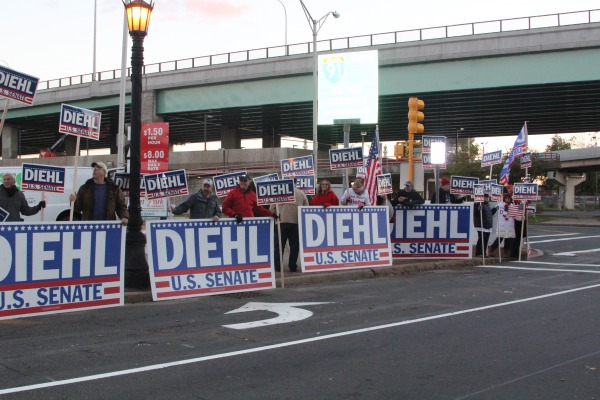 SPRINGFIELD – By now, both Sen. Elizabeth Warren and State Rep. Geoff Diehl know what to expect from one another and Sunday’s debate gave both candidates for the Senate an opportunity to return to themes they’ve established on the campaign trial.

For Diehl, he repeated not only his assertion Warren is running for president and would not be a full-time senator for the Commonwealth. He also emphasized several times his involvement in eliminating an automatic gasoline tax increase.

For Warren, she asked the question multiple times “Who does government work for?”

So if the viewing audience for the debate produced by WGBY and broadcast live seemed to tread over familiar ground, the surprise of the evening was provided by Dr. Shiva Ayyadurai, the independent candidate for Senate who has targeted Warren with a phrase “Only a real Indian can defeat the fake Indian.”

According to sources at WGBY, Ayyadurai tried to enter the studio to be part of the audience but was prevented by police. During the commotion, a number of his supporters came in.

They waited until moderator Carrie Saldo had asked a question of Warren about the recent revelation that a DNA test shows a possible Native American heritage and then stood up yelling why Ayyadurai was not in the debate.

The effort to get attention was muted for the broadcast audience as microphones were turned off and the camera angle was shifted away from the audience and the protesters.

There were at least four Springfield police officers in the studio who quickly led seven or eight protesters out. Another protester interrupted Warren answering the question about Warren’s background and was also led out.

The disturbance did not seem to rattle either candidate and the debate went forward.

Some of the moments between the two candidates:

• Warren asserted the Diehl supported offshore drilling despite his support of the Commonwealth’s fishing industry. Diehl fired back in his rebuttal that he is against anything that would adversely affect the fishing industry or offshore wind turbines.

• They seemingly agreed the Commonwealth’s decision to legalize marijuana should not be hindered by the federal government. Diehl views the issue as a one for state’s rights and Warren said she worked with Republican colleagues on a bill that would address some of financial and tax issues on the federal level but Sen. Mitch McConnell will not allow the bill to come for a vote.

• Warren blamed the Trump tax bill and the resultign saoring federal deficit as the reason that some Republicans in the Senate are calling for potential cuts to Social Security and Medicare. Diehl said Social Security’s issues would be fixed by the increased amount of wages and jobs created by the tax cuts.

• On the issue of civility in politics, Diehl said the tone set by Trump is “disappointing” but is one he does not follow. He accused Warren on being uncivil with name-calling. Warren did not deny using combative language but noted in one case her words described someone who was attacking in her view people who were “the most vulnerable.

• During questioning about how the Trump Administration reacted to the devastation of Puerto Rico, Warren criticized the administration and noted the previous issues with the island’s debt crisis. Diehl accused Warren with being “obsessed” with Trump.

• On east-west rail and statewide access to broadband, Diehl and Warren agreed at least in part, Warren called for federal allocations and charged the Republicans have no real infrastructure plan. Diehl said that to make either issue happen, there must be private sector partners. Warren said this answer was from the “standard Republican playbook.”

After the debate both candidates conducted brief press availabilities. During the debate Warren charged Diehl wanted to go to the Senate to be the swing vote that would completely repeal Obamacare. During the interview, Diehl praised the Massachusetts system put in place by Gov. Mitt Romney and the Legislature.

He said Massachusetts should go back to a state’s solution.

During her availability two reporters hammered Warren with the question of whether or not she could serve effectively as a senator if she decides to run for president.

“I will be there [the Senate] to work for the people of Western Massachusetts. Look, this is my job … I got into this fight because I saw Washington tilt further and further toward the rich and the powerful,” she said.

Warren also defended her ability with work with Trump and offer proof of 12 bills she supported being signed by the president.