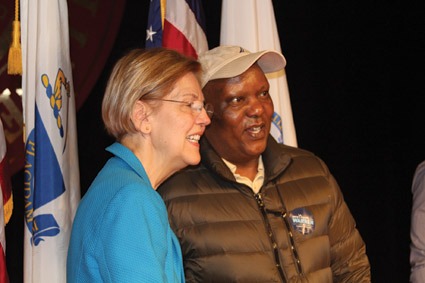 Sen. Elizabeth Warren is seen here with Springfield resident Joseph Kariuki, one of the hundreds who attended her Town Hall Meeting on March 9.
Reminder Publications photo by G. Michael Dobbs

SPRINGFIELD – It appeared to be almost unnecessary for Sen. Elizabeth Warren to mention she was running for re-election when she came to Springfield on March 9 for one of her Town Hall Meetings.

Granted the meeting was not a campaign event by definition, but no member of the audience even brought up the fact that Warren would be facing one of three Republican challengers in November. Warren didn’t mention it as well.

Warren answered a wide range of questions from the capacity audience at the auditorium at Springfield Technical Community College including the ubiquitous inquiry whether or not she was planning a run for the presidency in 2020. She quickly brushed that aside looking for a different question.

At another meeting it was reported Warren dismissed any speculation about running for the White House.

Instead Warren answered questions and kept hammering home a theme of involvement, urging those present to be involved in issues and taking action such as calling or writing members of Congress.

She did not mince words with the audience that Republicans have been “hacking away” at democracy by efforts to suppress voters, a lack of response to the Russian interference in the last election, attacking an independent judiciary and attacking a free press.

“I never thought the word ‘fact’ would need a modifier,” she said.

Despite the events she mentioned, she said she was fundamentally optimistic” because she was heartened by numerous protests to issues and policies.

“This is an exciting time to be in this fight,” she noted.

When asked about lowering the voting age to 16, she sad it was “a really interesting idea … I’m open to it.” She added she supports efforts to make voting easy such as same day registration.

Concerning the recently passed tax bill, she said, “The perception and reality don’t always stay in alignment.” Warren added the tax bill encouraged paper products giant Kimberly Clark to lay off 5,000 people. The New York Times reported the company is taking advantage of new corporate tax laws to help pay for the cuts and for restructuring.

She said the tax bill was not bipartisan and Speaker of the House Paul Ryan is now looking to cut Medicaid.

When asked about Net Neutrality, Warren explained Congress has 50 days to overturn by a simple majority the recent Federal Communications Commission decision that would allow Internet providers to create different speeds at different prices and alter access to content.

She touched several subjects when speaking to the press during a four-minute availability. On the recent announcement of new tariffs on foreign steel and aluminum imports, Warren said, “I’ve been a critic of America’s trade deals for a very long time and I’m not afraid of changing our tariff polices, but it needs to be done as part of an overall coherent strategy. And announcing two industries got a great deal and backing off what that means is not a coherent strategy.”

Warren answered a question about the upcoming summit between President Donald Trump and North Korean Supreme leader Kim Jong-un by saying, “I’m glad to see us pursue diplomatic negotiations with North Korea, but, because our military leaders have told us for a long time now there is no military-only solution. However, these are really complex negotiations that have a whole lot of layers to them and I’m very concerned right now because the State Department is not at full force. We have no ambassador to South Korea. Major diplomats in the region who know the economy, know the history know the military objectives just aren’t there and I’m very worried that Donald Trump will go into these negotiations and Kim Jong-un will simply take advantage of him. You know the Kim family for generations has wanted to meet face-to-face with a president of the United States and before we let them get that prize we ought to be darn sure that we know what it is they’re willing to negotiate with, what they’re willing to give up to get there and right now I just don’t see that.”

While Warren has ruled out a run for the presidency, she commented on media reports that indicated that former Gov. Deval Patrick has a run for the nomination on his “radar screen.” She said, “Gov. Patrick is a terrific man, he is a good human being. I think he was a strong governor and whatever he wants to do in public service would benefit this country.”

Following the media availability, most of the audience members lined up with their cell phones in hand to pose for a selfie with the senator.  It was also obvious that among elected officials Warren is a rock star.