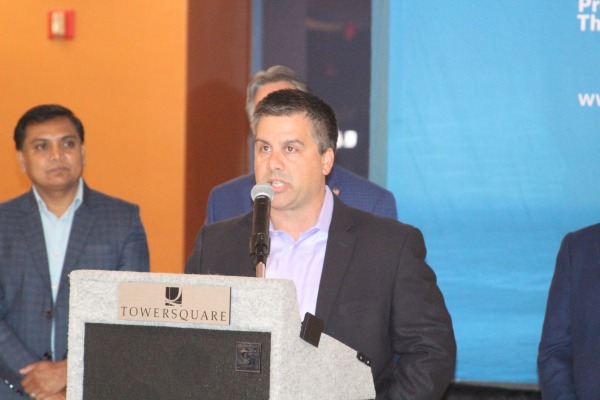 SPRINGFIELD – One hundred-fifty new employees will arrive in the downtown area in August when Wellfleet moves its corporate headquarters from a site on Roosevelt Avenue to three floors at Tower Square.

“This is a big thing for us and for Tower Square,” Vid Mitta, co-owners of the building, said at a press conference on June 7. Mitta revealed Tower Square would erect a Wellfleet sign on the tower.

DiGiorgio explained the company “kept pretty quiet” during its growth since its founding and specialized in helping 200 colleges and universities with insurance needs.  Currently the company has 100,000 student customers.

DiGiorgio said the move to Tower Square was made after polling the company’s employees. The parking facility, the downtown business culture and food options as well as “downtown energy” were reasons they cited in supporting the move.

Tower Square has been the location for two other recent tenants. The Springfield YMCA will be moving from its Chestnut Street building into the complex and White Lion beer is currently constructing its brewery there as well.