Former brownfield sprouts back to life as local produce supplier 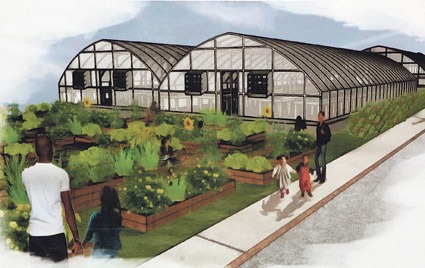 According to this rendering, the new greenhouse that will be under construction in Indian Orchard will have several sections for different crops.
Reminder Publications photo by G. Michael Dobbs

SPRINGFIELD – In the center of urban Indian Orchard on a former brownfield site, there will soon be a greenhouse producing an expected 250,000 pounds of fresh vegetables and herbs.

Mayor Domenic Sarno was among the officials at the announcement on Oct. 6 that Wellspring Cooperative Corp. has purchased 1.7 acres on the former Chapman Valve site from the Springfield Redevelopment Authority to build a greenhouse that will produce an initial five jobs and increase to nine employees.

Fred Rose, co-director of Wellspring Cooperative Corp., explained to Reminder Publications the greenhouse would produce those vegetables for Baystate Medical Center and the Springfield Public School, as well as for retail in Big Y markets.

Rose said his organization has been looking for a suitable location in the city for more than a year.

“It was hard to find in Springfield,” he added.

Rose said the group is within $50,000 of raising that amount.

The greenhouse, as Mary Hoyer, treasurer of the organization, explained, will not be a non-profit, but rather a for-profit business that will be owned by the employees.

The employees will be selected from those who are without a job.

Rose said crops would be grown at the greenhouse all year-round. The new venture “really meets a need and demand in the city,” he added.

Stephen Hilyard, will be the director of the greenhouse. He said that in two to three months the land will be cleared and construction can start on the building.

Once it is completed, the first crops would be shipping to buyers in two months.

He said he had a meeting recently with Joe Frigo, owner of Frigo’s Food, who told him “he’ll take all the fresh arugula he can get.”

The target for opening the facility is sometime in December.

The plan is in two stages – the first being a quarter-acre hydroponic greenhouse that will grow greens, lettuce and herbs with the second phase constructed in two years to grow cherry tomatoes and cucumbers.

There will also be an educational greenhouse to provide horticulture training to community members and students.

Sarno said two words are important in describing the project: “collaboration” and “green.”

For more information, go to http://wellspring.coop/co-op-businesses/greenhouse-cooperative.